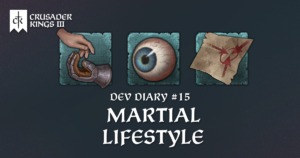 Welcome back to the final installment of our breakdown of the different Lifestyles!

Your host today will be me, Linnéa a.k.a. @Heptopus, just to spice things up a little, and I am here to guide you through Warfare. But, before I do, I want to remind you that armies and battles themselves are very different from CK2, so if you want a refresher, have a look at good ol’ Dev Diary 3.

Without further ado, let’s have a look at the Focuses!

Strategy – Makes sense if you want to win, or even just wage, wars.

Authority – Perfect for when you want to keep your realm under absolute control and cement your rule.

The trees themselves are very varied and offer some interesting bonuses. There’s also a couple of Schemes that I’m really excited to tell you about at the end!

This tree is, as one might expect, all about warfare. Some perks are fairly straightforward, such as improvements to your Men-at-Arms: Mitigating retreat losses can be really useful if you are unlucky in a battle (and we all know it is ONLY down to bad luck), so that you can bounce back faster and show the enemy what you’re really made of. Whether you’re fleeing or attacking, this perk will make sure you do so in an organized manner. Useful when you want to hunt down the remnants of an enemy army, or protect the remnants of your own!

It’s also not the only perk that can speed up a conquest:

So now that you have the speed, and you have the siege weapons, what more could you possibly need for a successful offense? Well, if you’re more inclined to go for the drive-through approach (some people call it raiding), or if you often find yourself losing soldiers due to hunger, we have the solution for you!

And if that’s still not enough you can improve your army even further by making your MaAs bring shovels to the campaign: With an army this good, it would be a waste to only wage wars when you absolutely had to, wouldn’t it? That’s why we’re making CBs easier to use than ever before:

At the end of the tree we find the Strategist trait. It gives a boost in both Diplomacy and Martial, allows you to cross water freely, AND increases the number of dead soldiers your enemy suffers when facing you in battle. In other words, this tree will make you unstoppable on the battlefield and rightfully feared across the land!

If you want to focus on your own realm more, and make sure it’s completely under your control, then this is the tree for you. To start it off we have some perks that will give you more stable ground to stand on, such as:

And if you’re going for real stability you can tighten your grip on the population of a county so hard that you squeeze out benefits in the form of both gold and levies!

Absolute Control means that all of the counties you have full control over will give you 10% more taxes and levies as long as you maintain your iron grip on the populace.

And when vassals, or peasants, try to turn against you… Well, let’s just say that you will make it harder for them to succeed.

But what if the threat isn’t coming from within your own realm, but from outside it? Don’t worry, we’ve got your back:

If you need an extra push to push out an insistent enemy, you can always trade gold for swords:

And, to top it all off, we have the trait Overseer. It grants you a boost in Martial, Stewardship, and Control Growth Factor, so the hold you have over your realm will be cemented for decades to come!

Romance, prowess, and bravery… ah, the marks of a true charmer! This is the tree for those of you who want to focus on the more “elegant” side of warfare, while still giving your war efforts a boost: When you tire of fighting and it’s time to negotiate for peace you will be more persuasive than ever: For friendlier times your gallant behavior attracts suitors for both you and your family, suddenly making those ridiculously good alliances possible!

Even your own spouse isn’t immune to your charms: Of course, love is not always found in an arranged marriage, and the rumors about your gallant behavior aren’t limited to just your own court. If your dearly beloved needs to be charmed, or if you just can’t wait for permission to marry them, you can get some help along the way: I think this is the first time we mention these schemes? They’re a real treat!

The Romance Scheme finally lets you enter a chivalric romance with a character, seducing them in a court-approved manner. Just imagine a knight pining after his lady, his heart full of longing, neither of them acknowledging the smoldering feelings between them… Now that can be you! If you succeed in this scheme, and resist the temptations of the flesh (at least in public), you and your beloved become Soulmates, a more powerful version of the Lover relationship.

And if you cannot bear to be apart, even though her liege will never approve of a marriage between you, do not fear! I bring you: Elope, marriage without any pesky relatives or lieges involved. However, in contrast to marriage, your partner actually has to like you for the union to work out, so you still have some work ahead of you. And make sure you’re not caught… This tree culminates in the Gallant trait. It affords you extra monthly Prestige, as well as some Attraction Opinion, and of course a healthy boost to both Martial and Prowess. With all this helping you along, neither foe nor maiden will stand a chance!

So… that’s it. Both for Martial and for our series of dev diaries focusing on Lifestyles; we made it through. I hope you’ve found something you’re looking forward to exploring and playing around with, and that you’re as excited as I am to see what kind of characters you will create with this!

Next week we’ll delve into interface, tooltips, and the tutorial, so keep your eyes peeled!