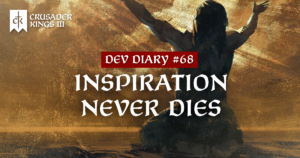 As you may already know, artifacts are making a triumphant return in Royal Court. The artifacts themselves will be familiar to those of you who have used them in CK2, but how you actually get your hands on them will be slightly different. As such, I won’t talk much about the artifacts themselves for now, but I’ll be going over one of the major ways of how you will acquire artifacts. 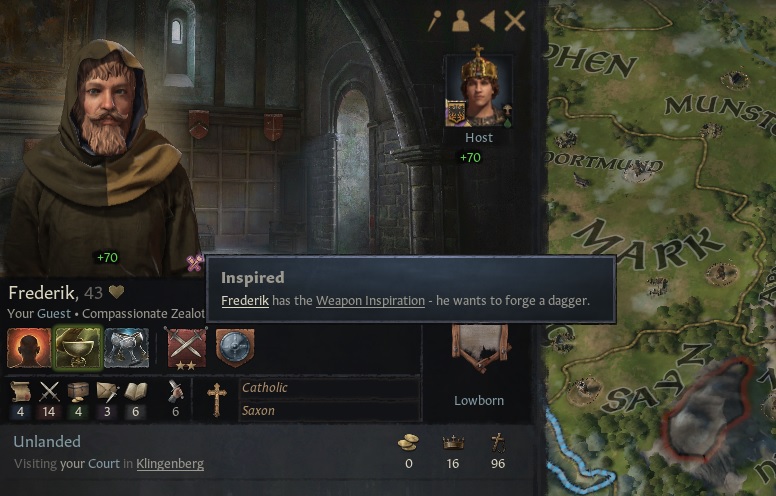 [Image of a character with an active inspiration]​

Inspirations only occur for landless characters. We want to extend the immersion of guests and courtiers by making them valuable to you even if you have no desire to push their claims, or use their skills as a councillor. Inspired characters will travel the world, from court to court, seeking a wealthy monarch to sponsor them and their creation. Realms with a high grandeur will be able to attract inspired characters more frequently than those with low grandeur. Granting them a higher chance at receiving skilled craftsmen that will be able to forge an artifact to meet your expectations.

Once an inspired character arrives at your court, you can choose to sponsor them by giving them the gold they ask for. A skilled character will demand larger amounts of gold, but will also yield better results in creating an artifact. Most of the time at least. No one is infallible after all. The skill that is relevant depends on the type of artifact they want to make. For example, a weapon and the quality it gets is dependent on the character’s Martial and Prowess skill. Writing a book, on the other hand, scales with Learning. 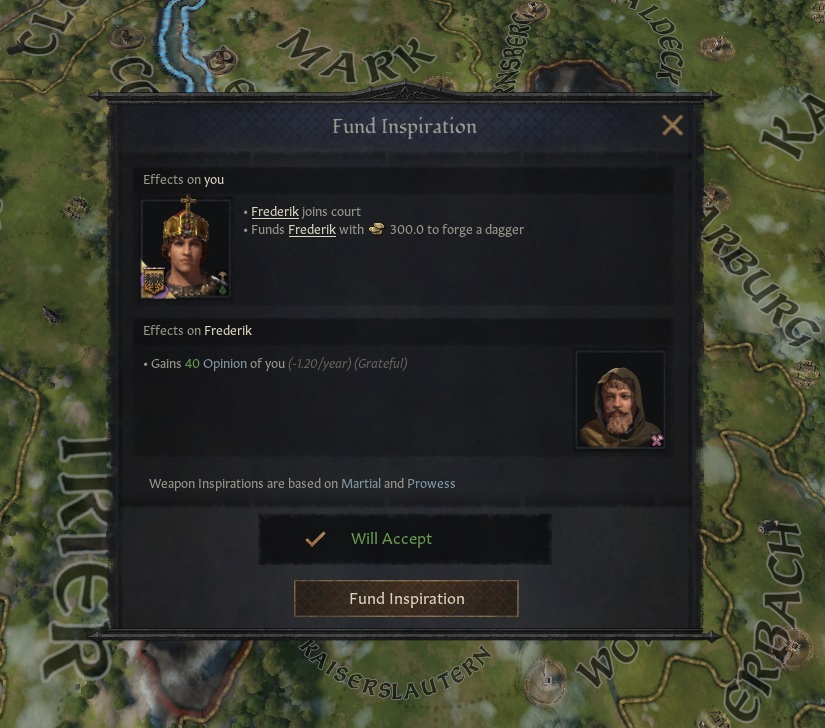 [Image of the Fund Inspiration interaction]​

After funding an inspiration, it will take some time for the character to create the artifact. During the creation progress various situations can happen, such as the character asking for better materials to work with. Below you’ll find such an example, in which my inspired character finds excellent material at the local market. Approve their request and pay for the material, and you’ll increase the overall quality of the artifact they’ll produce.

An inspiration gains progress similar to that of a scheme. You’ll gain progress depending on a chance each month, making the actual time it takes to complete vary. Once the inspiration reaches full progress, the character will approach you to present their creation.

[Image of an inspiration being completed]​

Mind you, this is not the only way in which you can get an artifact. Inspirations exist to serve as the most significant means of doing so, since they will generally grant you artifacts of a higher quality. You can still get artifacts by other means, such as getting them in events. I hope you enjoyed this brief look into how an artifact can come about. Stay tuned for more information regarding the Royal Court!