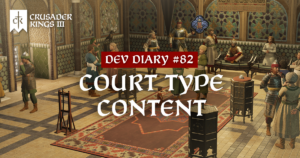 Once again shadow posting for our wonderful Dev, CC! Who could this mysterious figure be who I am ghostwriting for? We may never know the answer to that. However, we do know that the info from today will be quite interesting for those of you following along with Royal Court updates and information!

Without further ado, may I present:

Court Type Events:
Hello and welcome to another Dev Diary. We talked about the Court Types system last week, and continuing on that, this week we’ll showcase the different types of content you might experience depending on your chosen court type! 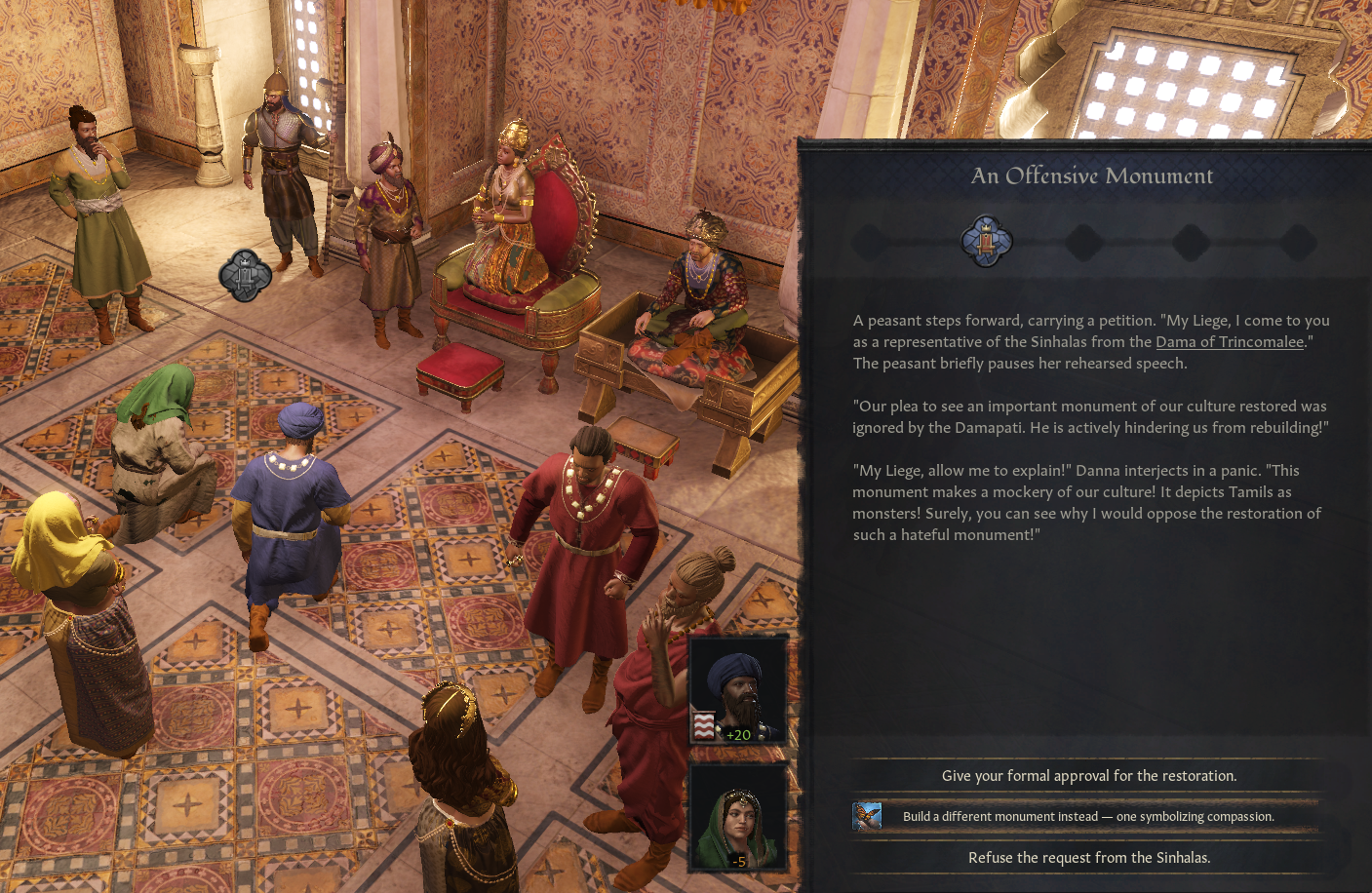 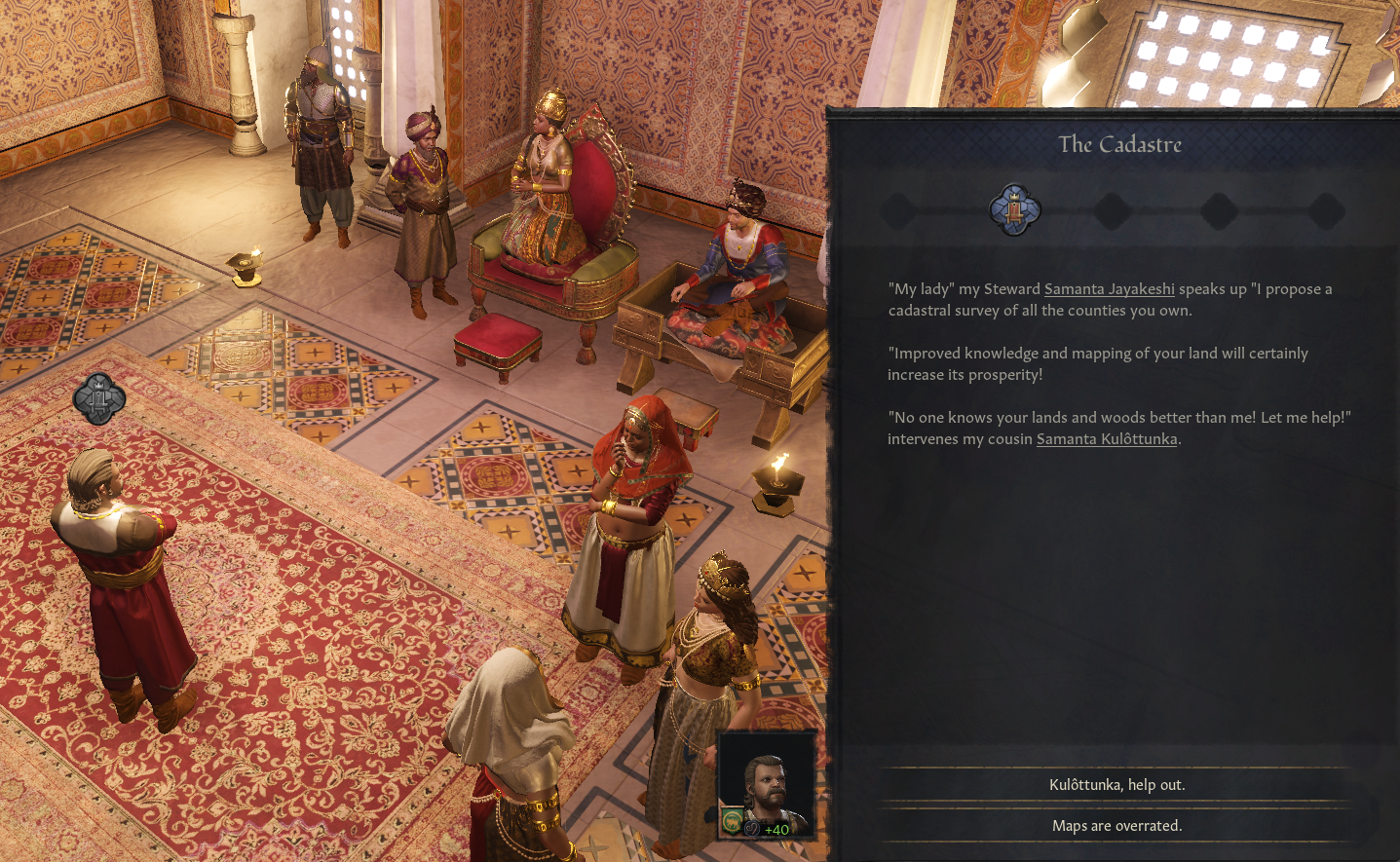 If your court is known as a place of learning, then you can expect events concerning scholarly matters to be more common. If it’s a place famed for its administrative nature, then events related to that will be more frequent.

These “court event weighings” don’t eliminate events from the pool, they just alter their “weights.” It’s not just petition events that are affected either, but the court events too. 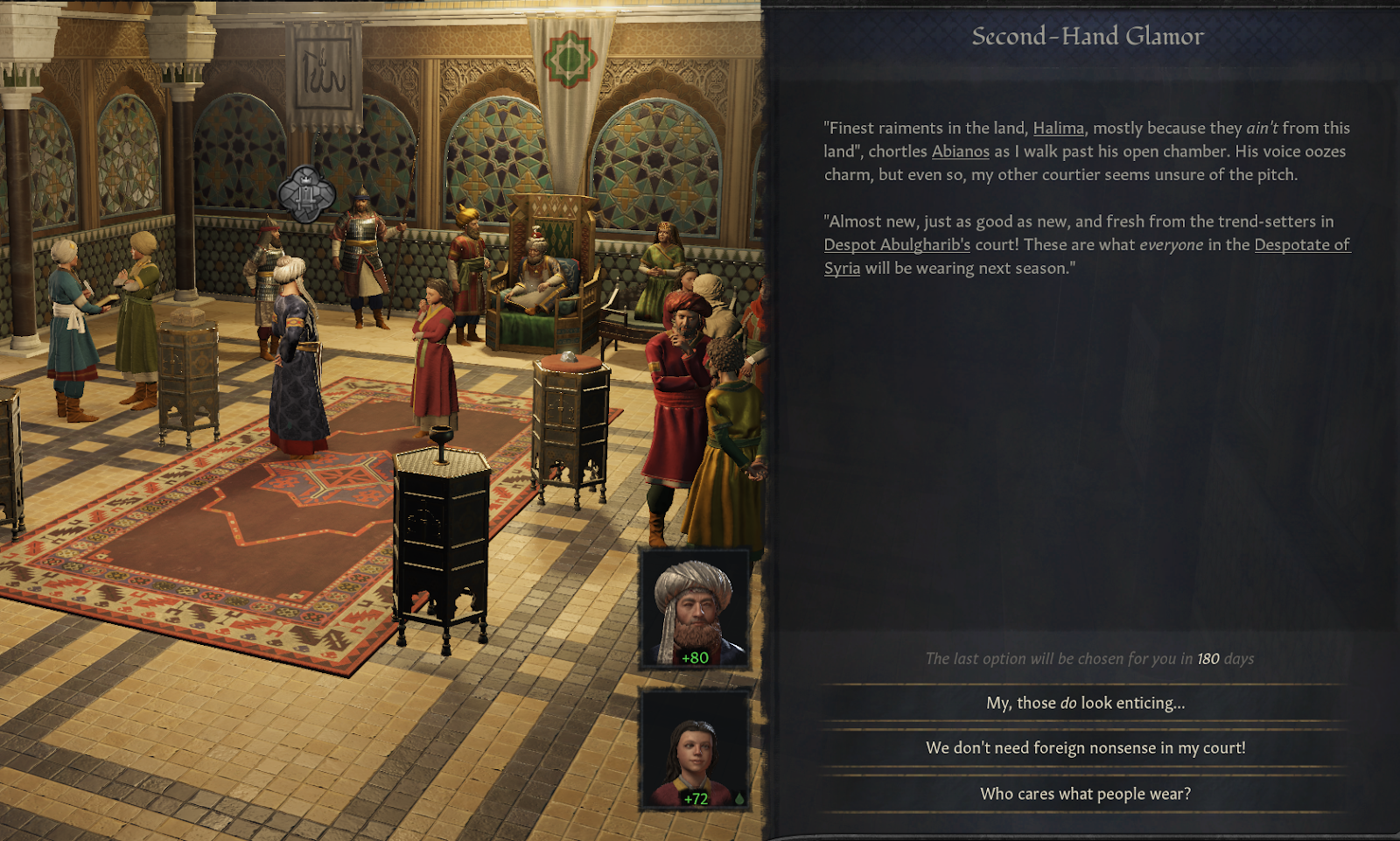 And if you think that the events are limited to the court room alone, nay nay. We’ve added court type weighted events outside of court as well. Nothing is sacred, nowhere is safe. 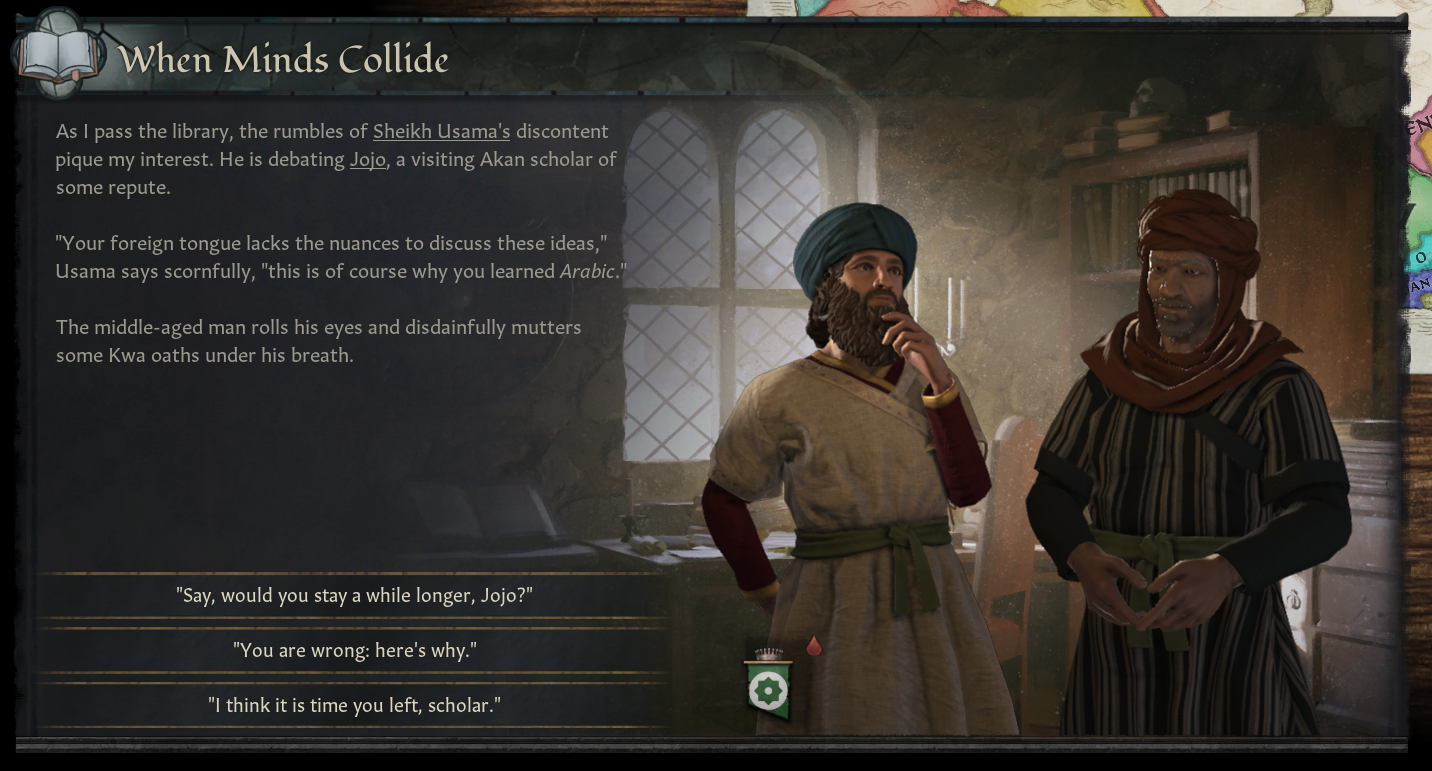 [image of event where an academic disagreement is happening; more common in scholarly courts]

Likewise, some new content is based off of your grandeur level and even your amenities. For instance, if your lodgings are low enough that you’re struggling to house everyone, that does give a _rather_ convenient excuse to evict guests and other scroungers from a cramped castle. 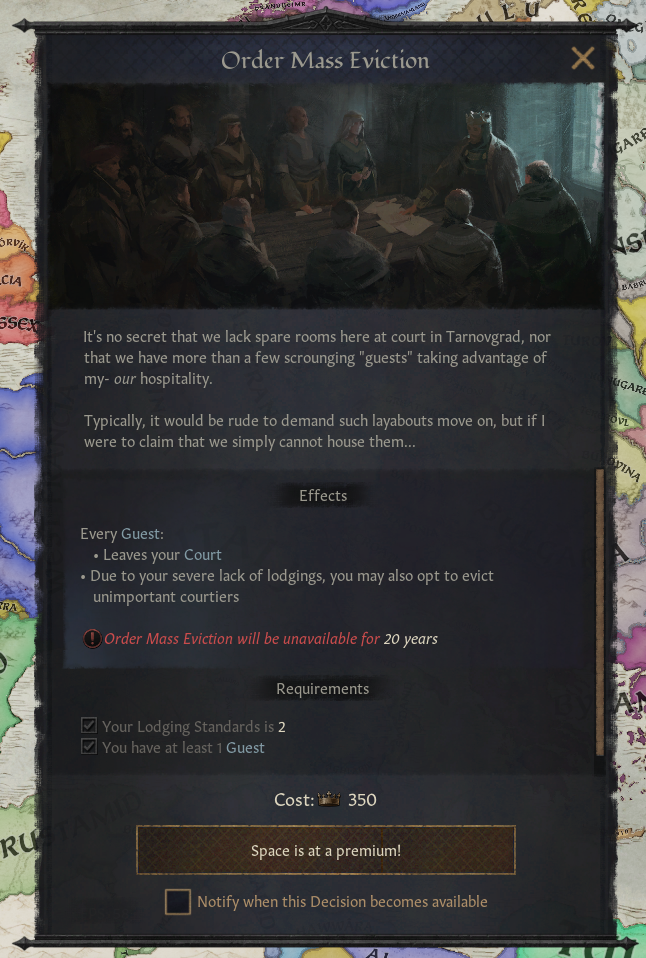 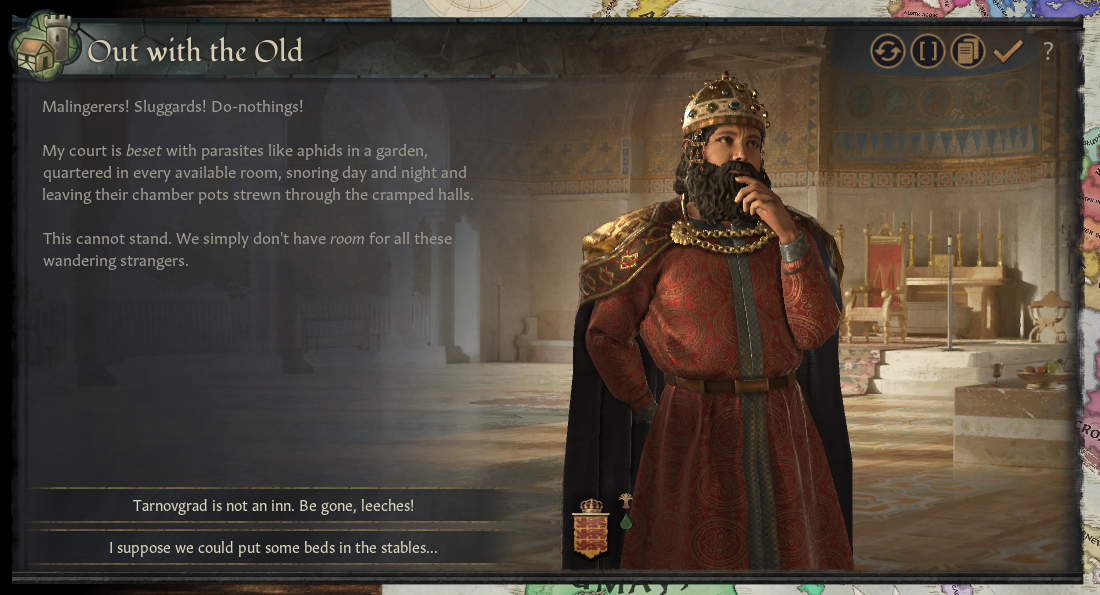 On the inverse side of things, having so many rooms that you don’t know what to do with them gives a bit of uhhh… space for experimentation. 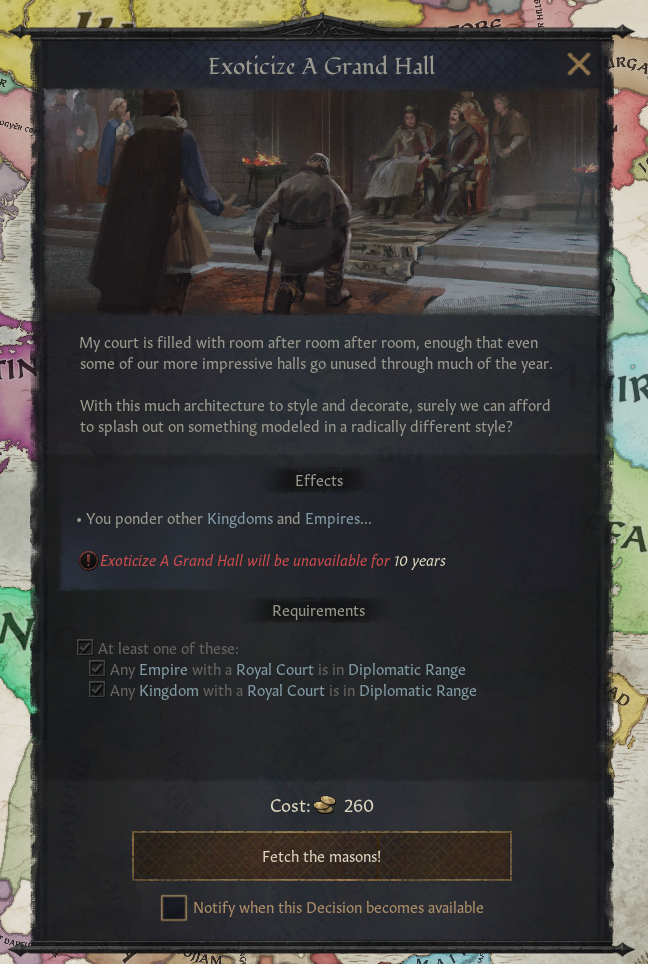 Redecorating in the style of a glamorous court is a bit on the nose, but not a bad way to crank up your own court’s grandeur.

Of course, for the _rustic_ look, you could redecorate after a less-than-fashionable court…

And, to round off, rulers whose courts lack grandeur that are willing to hold their nose a little can even burn some of their remaining dignity in exchange for skilled staff, rounding out their courts with experience even without pedigree.