Dev Diary #79: An Update on Cultures 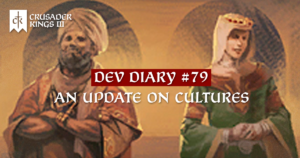 We’ve talked plenty about cultures already at this point, but I wanted to give you a brief update on what we’ve done since the initial reveal of the culture rework. Since then, we’ve taken some time to add additional functionality based on your feedback!

Previously, you could only add new traditions to a culture to fill out any empty tradition slots you may have. If you wanted to change anything regarding your culture, you would have to create a new one. Which begs the question. What if I want to keep the culture I already have? Or why can I not replace that one tradition to make my culture perfect? Fret not. The cultural head has gained the ability to change, or ‘reform’ if you will, their culture in order to change it without the need to create a new culture. The cultural head cannot replace everything mind you, but may change the ethos, the martial custom, and any tradition. If you want to change any of the remaining pillars you’ll have to create a new culture, either by diverging or forming a hybrid. Do note that you need to own the Royal Court expansion to reform your culture, similar to creating a culture. Even without the DLC, you can always add new traditions to fill out any empty slots.

Reasoning for what you are able to change this way is twofold. First, changing heritage or language for an existing culture felt a bit off. While a language in reality does evolve over time, that is something we don’t really represent in the game, which makes it weird to simply “replace” a language. And you can’t really change your heritage in the same vein as, say, a tradition. Secondly, we wanted to make sure that you still have a valid reason to create a divergent culture. The two approaches are slightly similar in functionality, but it is important that both reforming and diverging a culture serves different purposes and that the distinction between the two is clear.

[Image showing the options to reform or diverge a culture]​

The major difference is, as mentioned above, that reforming only allows you to change certain aspects about a culture, while diverging allows for additional possibilities. A second significant difference is the cost. Replacing a pillar will cost you prestige. The ethos in particular includes a rather hefty prestige cost that should make it rather difficult to repeatedly change it over the course of a campaign. You are, however, free to pick any ethos, regardless of circumstances. 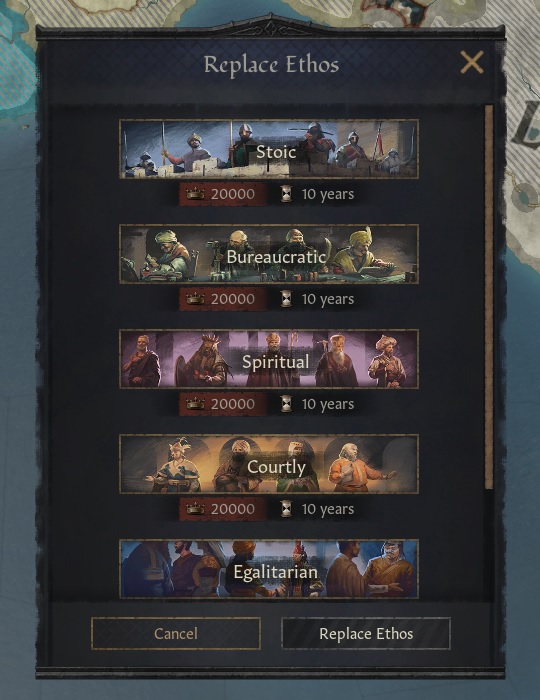 [Image of the ethos replacement window]​

Traditions will also be more expensive to replace. Instead of just a flat increase, replacing a tradition increases the prestige cost by 50%. The cost penalty will therefore be relative to how well your culture matches any given tradition, making the additional cost more harsh for already expensive (and less compatible) traditions. 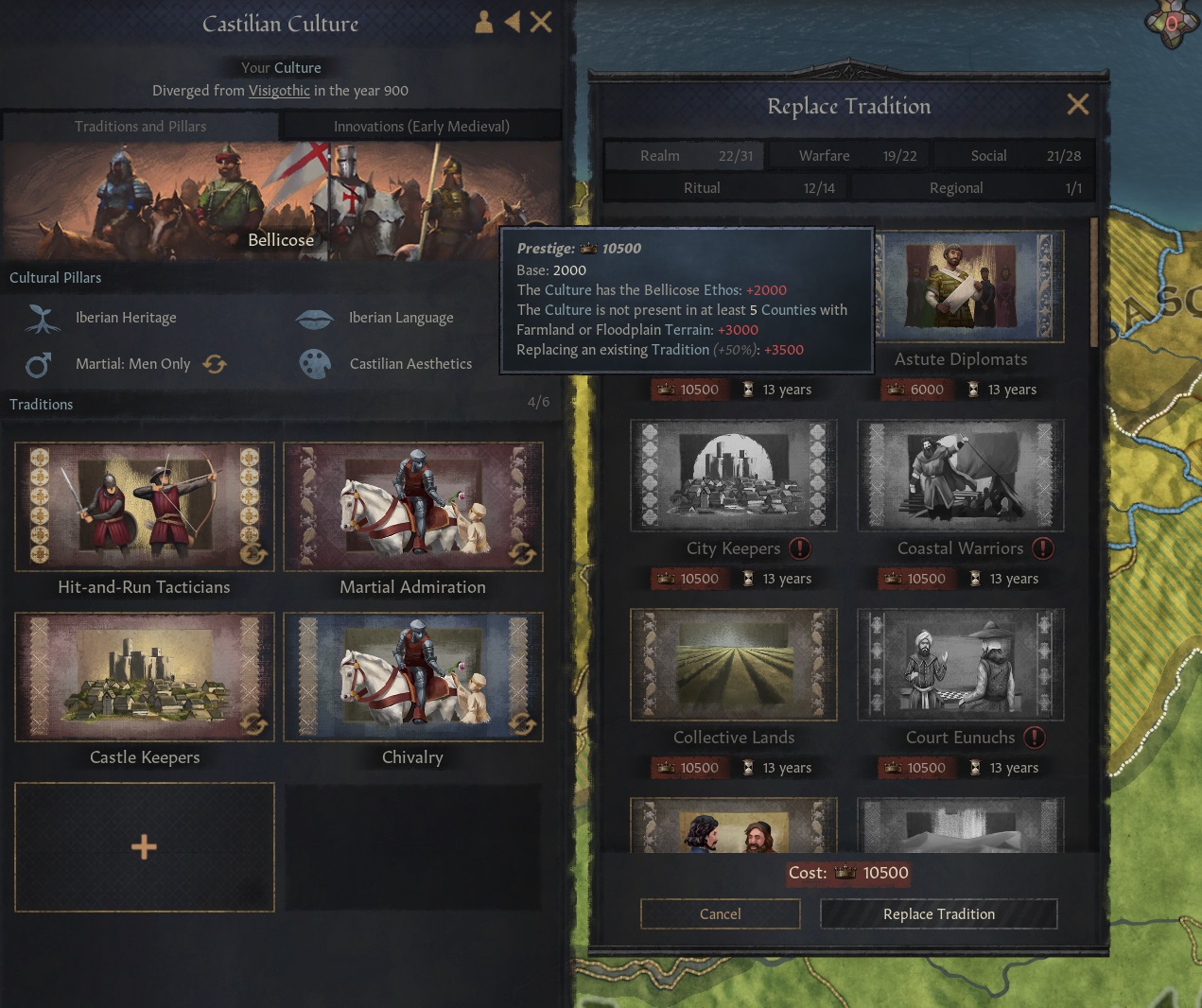 These additional costs will make reforming or diverging your culture easier or more difficult depending on your situation. Attempting to diverge from a large and unified culture, such as Greek when playing as the Byzantine emperor, will be rather expensive and the less viable option. Especially if you only want to change a tradition or two. Reforming your culture will be cheaper, allowing you to more easily tweak your culture over time.

If you are playing as the cultural head of a widely spread culture, such as Andalusian, diverging might instead be your preferred solution. Diverging from a culture that is spread out across multiple realms is significantly cheaper, allowing you to instead spend the prestige on replacing additional traditions or save it for something else entirely. Changing pillars is, for example, free when diverging, since you are forced to change at least one pillar in order to be able to create your new culture.

Finally, you might have noticed the hourglass in the above screenshots. This is the establishment rate. Whenever you add or replace a tradition, or change a pillar, it will take some time before the change is applied. The time required for a change to be fully adopted mainly depends on your culture’s size. Larger cultures will logically gravitate towards a slower establishment rate. The duration is also increased whenever you replace an existing tradition. As such, adding a completely new tradition to your culture is not only cheaper, but it will go faster as well. This is important because you may only have one cultural change pending at any given time. If you replace a tradition with something else, you will have to wait until that tradition has been fully adopted before you can change your culture again. Diverging, on the other hand, still allows you to do sweeping changes and they take effect immediately as you create a new culture. 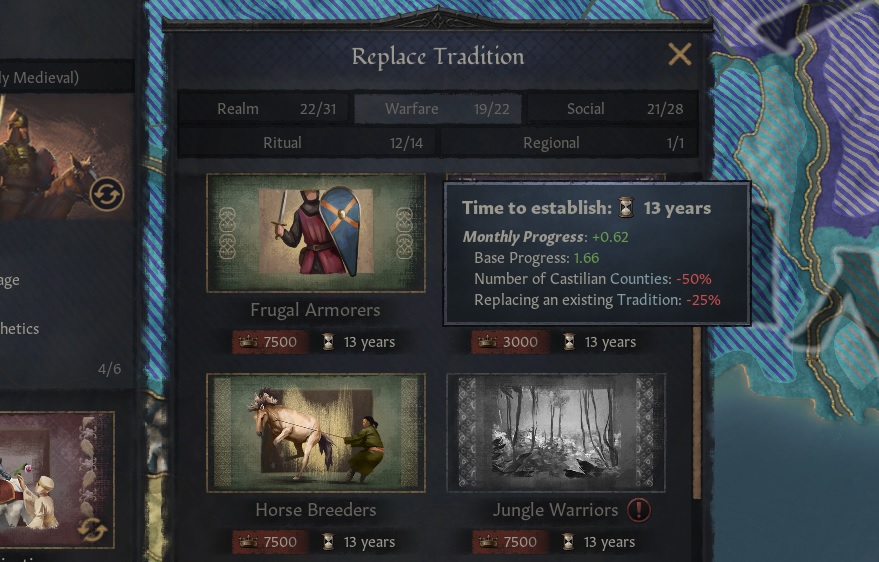 [Image of the establishment rate tooltip]​

That about sums up all of the additional changes we’ve done. In short, the ambition here is to allow you to shape your culture more freely in the way you want, without having to always resort to doing something that might feel a bit heavy handed. On a final note, I’d like to thank you for providing us with feedback and voicing your opinions! Giving valid and constructive criticism does, at times, pay off.