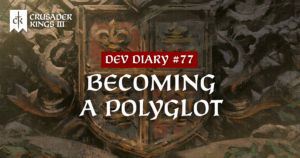 As you all know, one of the new Cultural Pillars each Culture has is their native Language. Now, what effect does language have? At its very core, Languages affect the Baseline acceptance between cultures – if two Cultures share the same Language Pillar, they’ll like each other better. But that’s not all, characters can also learn additional languages!

So, why do you want to learn a language? Knowing a language cuts the (rather hefty) opinion penalties for Different Culture in half, both for Characters and Counties. Planning on conquering a foreign kingdom? Start your conquest by mastering their language, making subsequent control of your new subjects just that much easier! The less accepted your culture is, the more impact learning a language will have.

Now for the more pertinent question, how do you learn another language? You learn new languages through scheming! 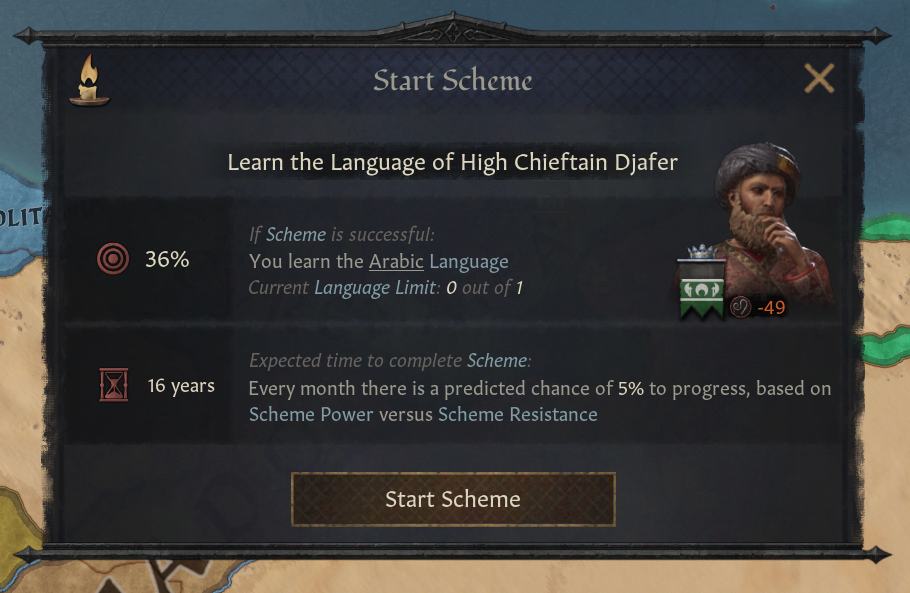 ‘Learn Language’ is a Learning-based scheme, where progress and chance of success are primarily derived from how scholarly your character is. This scheme is available to everyone, even young children (who have a vastly increased chance of success/progress, by virtue of being young, less tired, and having working brains). It targets someone who natively speaks the language, having you try to emulate them. While the exact target you choose is less important than in other types of schemes, you might still get opportunities to interact with them.

Now, learning languages takes quite some time. Though it’s possible to significantly speed up the process by employing a Court Tutor!

[Image of a Court Tutor]

You will also find that bonuses for this scheme have been added throughout the existing Lifestyle trees. Some examples:

If the scheme is invalidated by, for example, the target dying, your progress is retained and you get the opportunity to choose a new target. 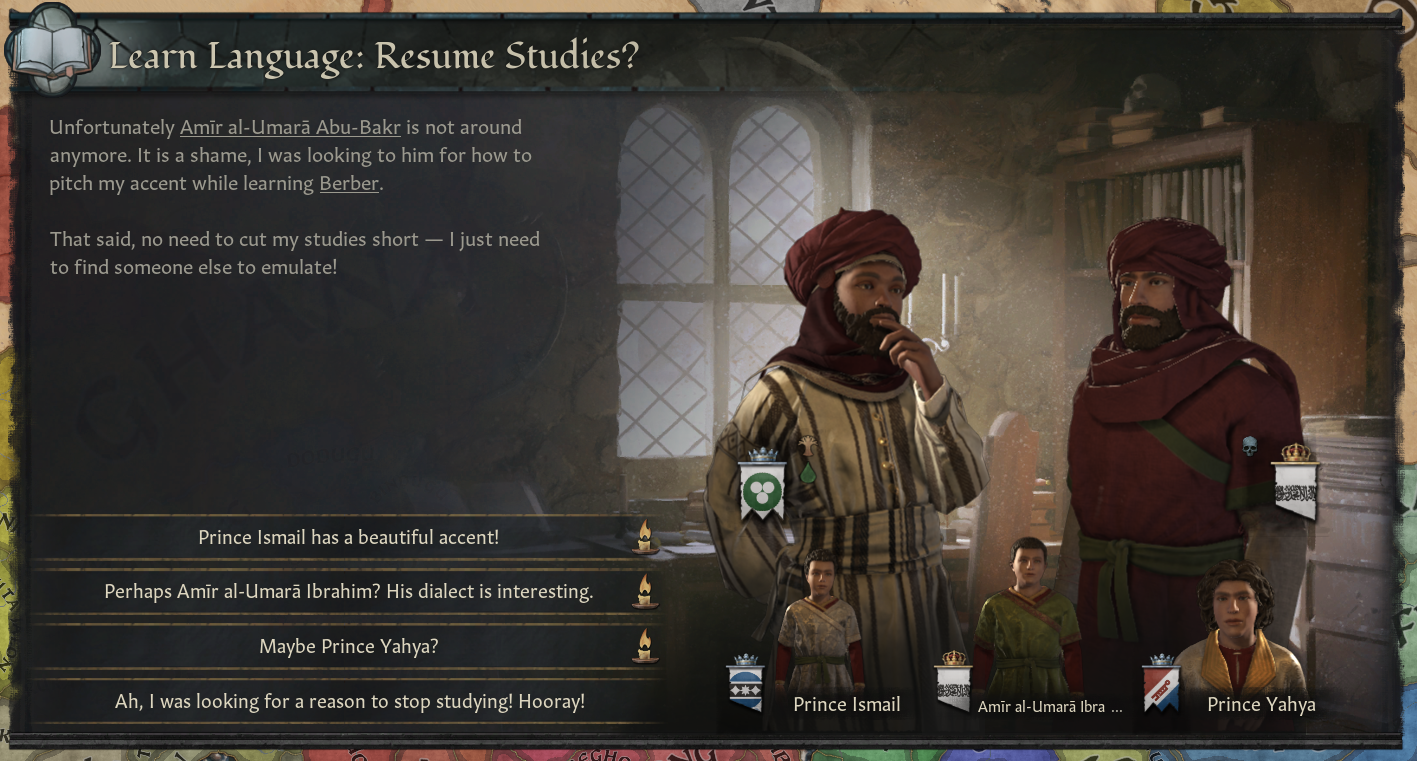 When we first talked about languages, we had some people (rightfully) point out that decreasing the chance of success the more languages you know isn’t very logical. We still needed a way to prevent characters from knowing all the languages in the world, and thus we introduced the concept of a Foreign Language Limit. This represents how many languages a character can comfortably remember. 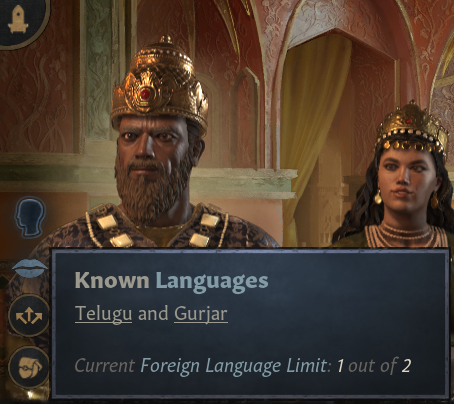 If a character exceeds their Foreign Language Limit, they will start getting events about feeling overwhelmed, giving you the choice between forgetting a language or gaining stress. In a sense, this system is very similar to how we handle characters having too many lovers.

The Foreign Language Limit is affected by many things, but primarily by a character’s Learning score, where every 5 attribute points increases the limit by one.

With this change, we’ve made it so that the more languages you know, the higher your success chance is for learning additional languages. You have the basics down already, after all.

[Image of a success chance breakdown] 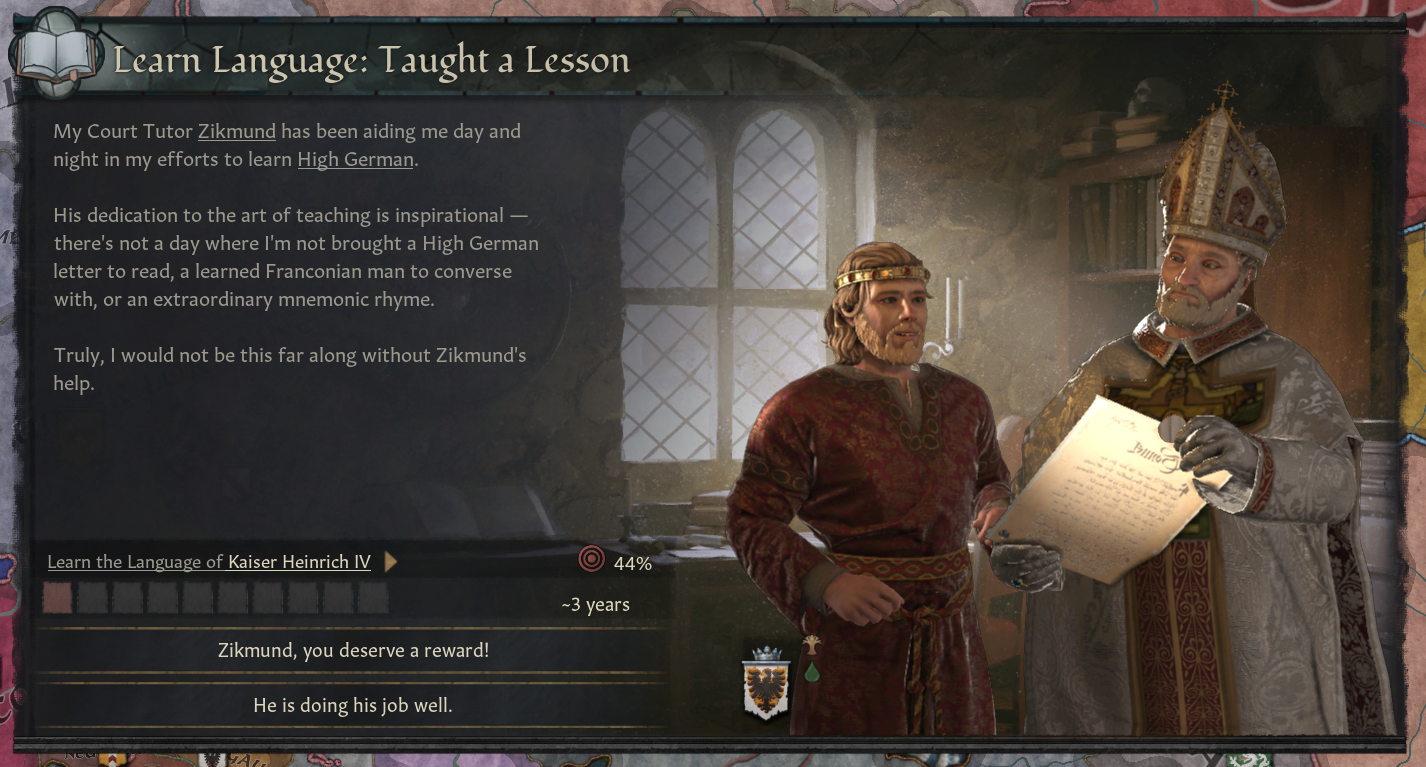 [Image of your Court Tutor helping you]

If you have a particularly good Court Tutor, they can guide your efforts along very speedily. 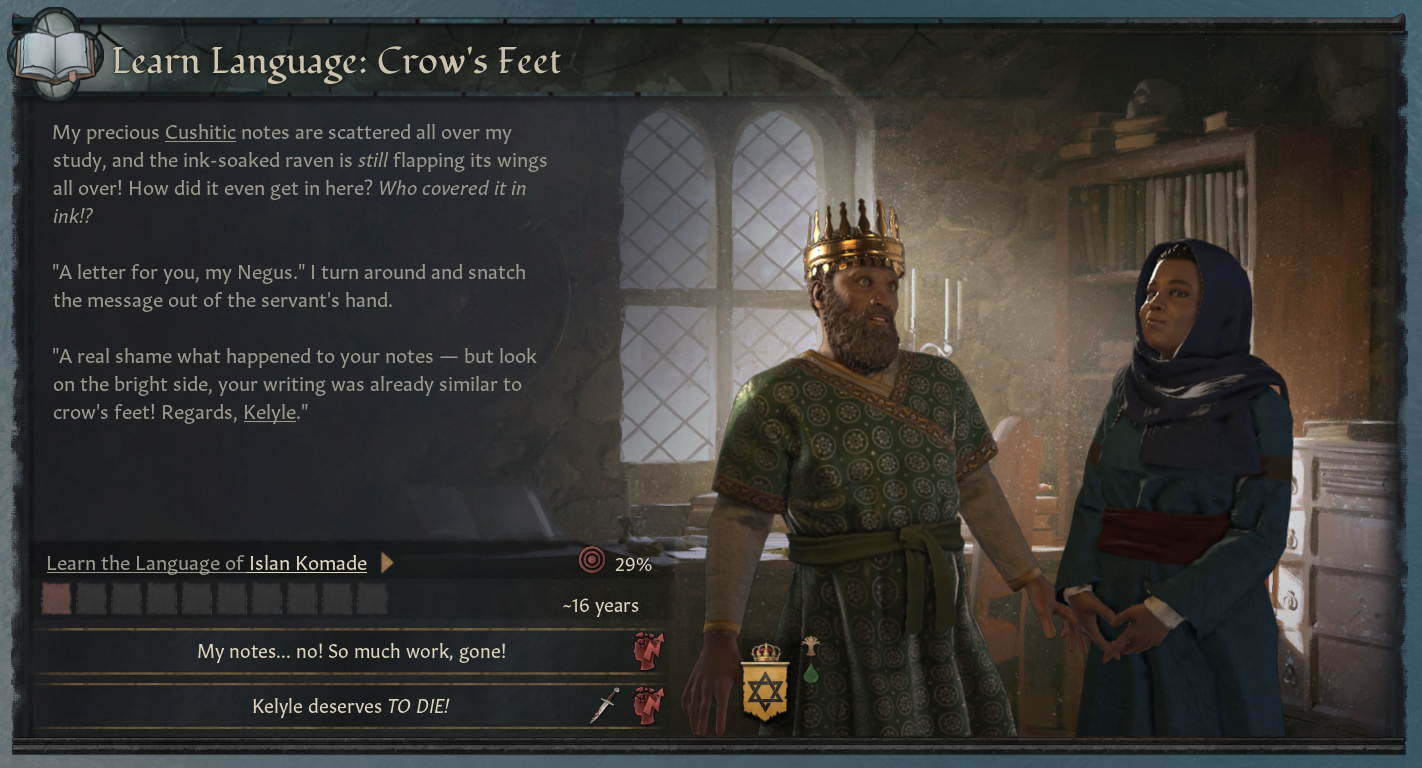 [Image of a rival ruining your notes]

Beware your rivals, lest they release ink-soaked birds in your study… 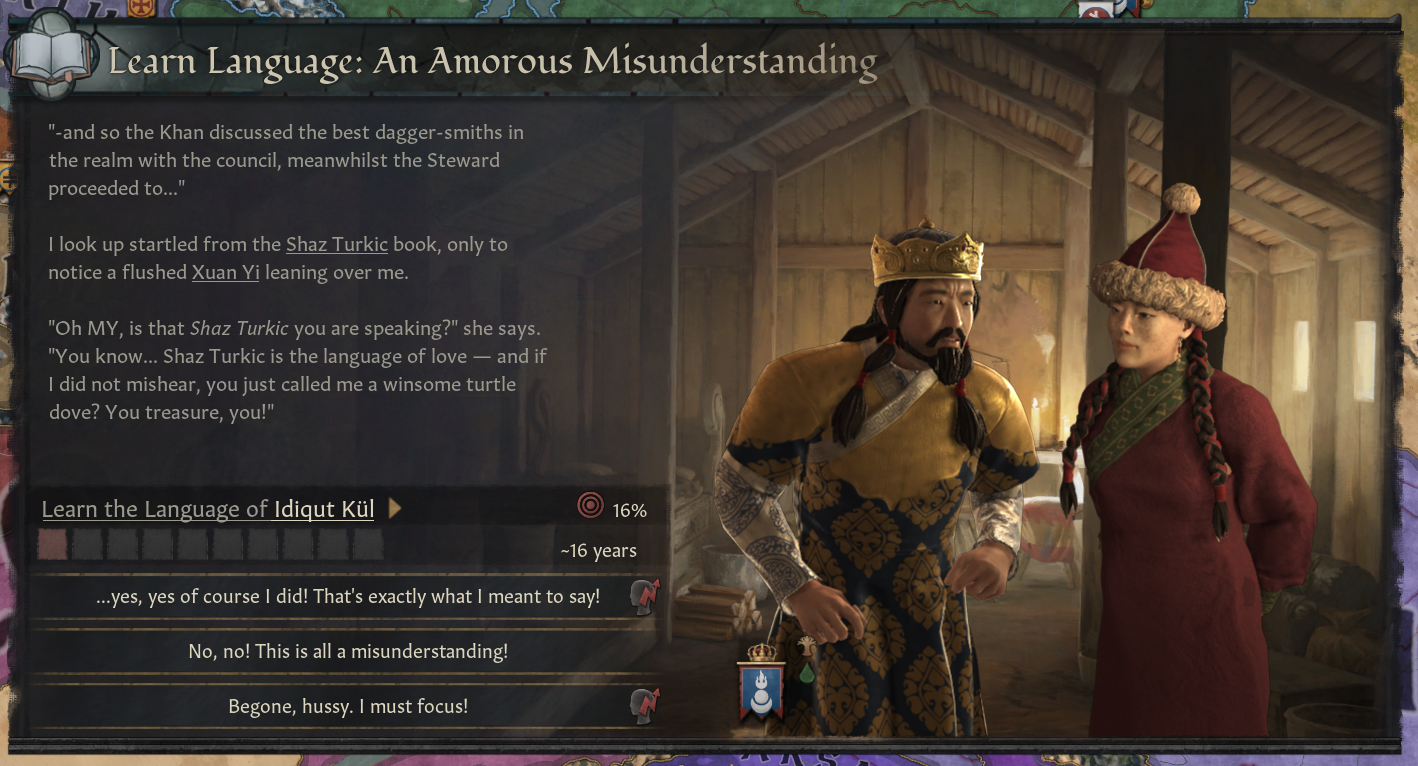 [Image of a very amorous misunderstanding] 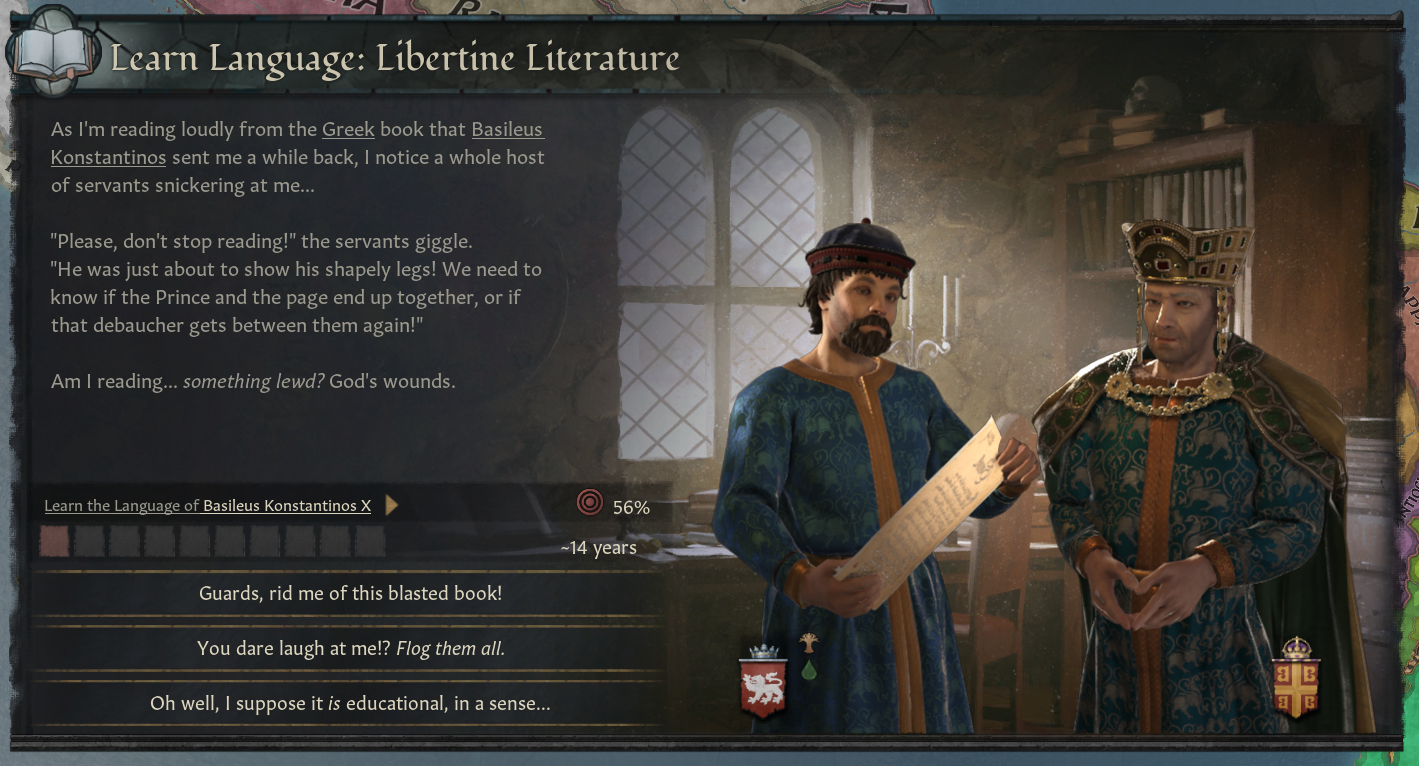 [Image of the Byzantine Emperor with a “It’s just a prank, bro”-smile]

Sometimes your target might find your efforts laughable, and try to make fun of you. 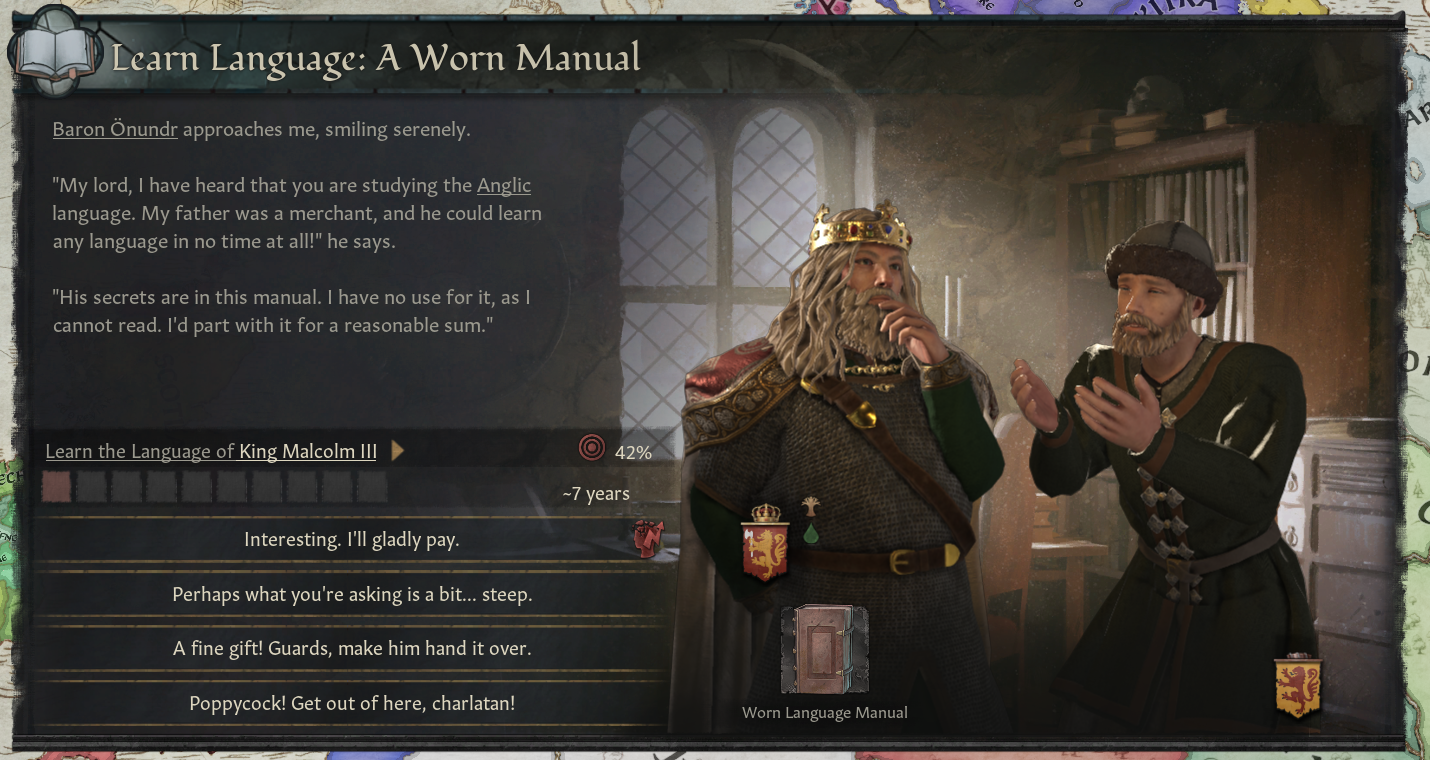 [Image of a merchant offering you a book]

Of course, there is an opportunity to gain a trinket-slot item that’ll help your efforts along. 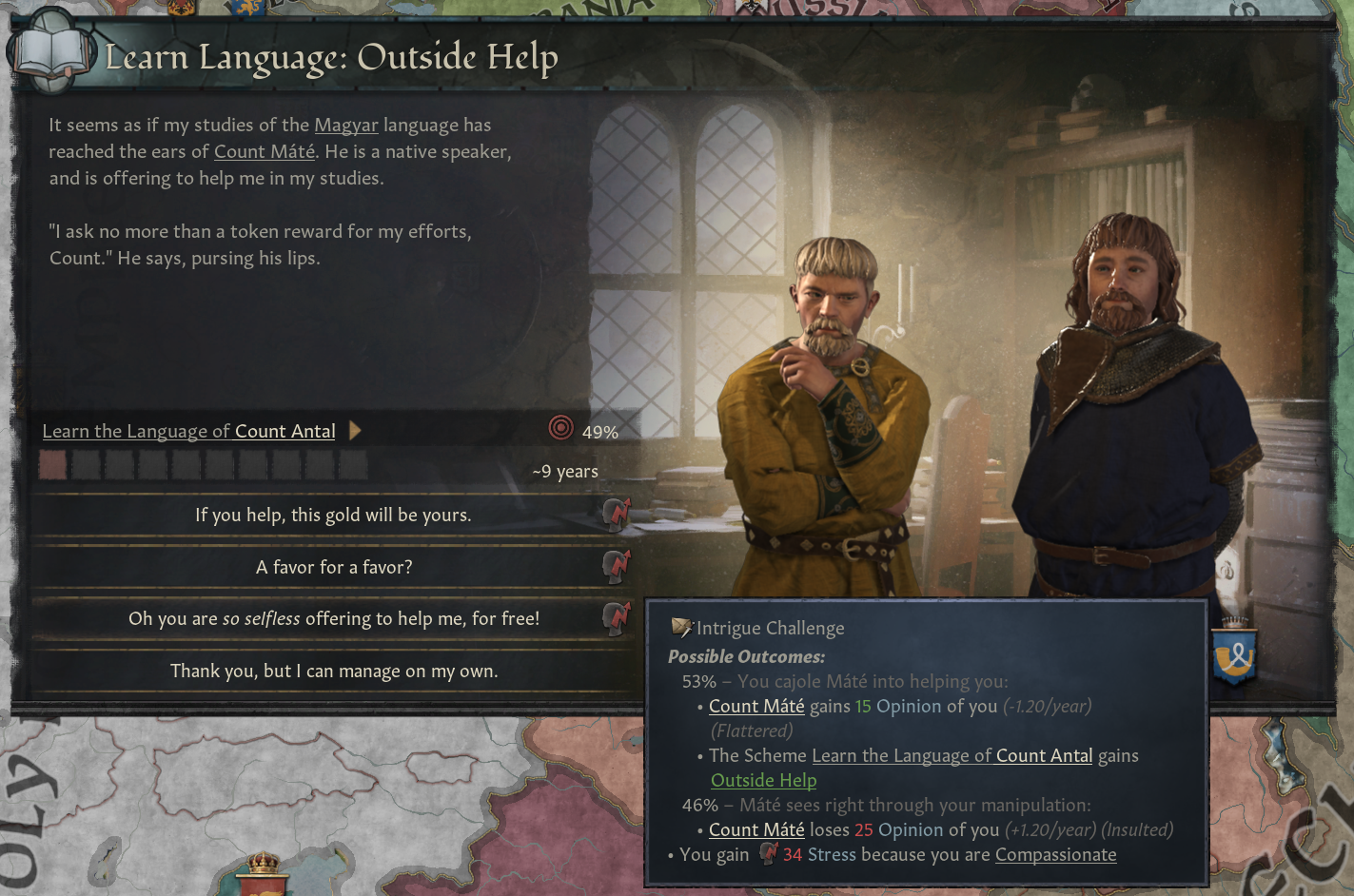 [Image of someone offering to help]

As learning a language isn’t secret, sometimes you’ll get offers from other rulers to help you… for a price.

When the scheme completes, you have a chance of success and failure. If you’re brave, you might even choose to test your new abilities right away by penning a letter to your target! 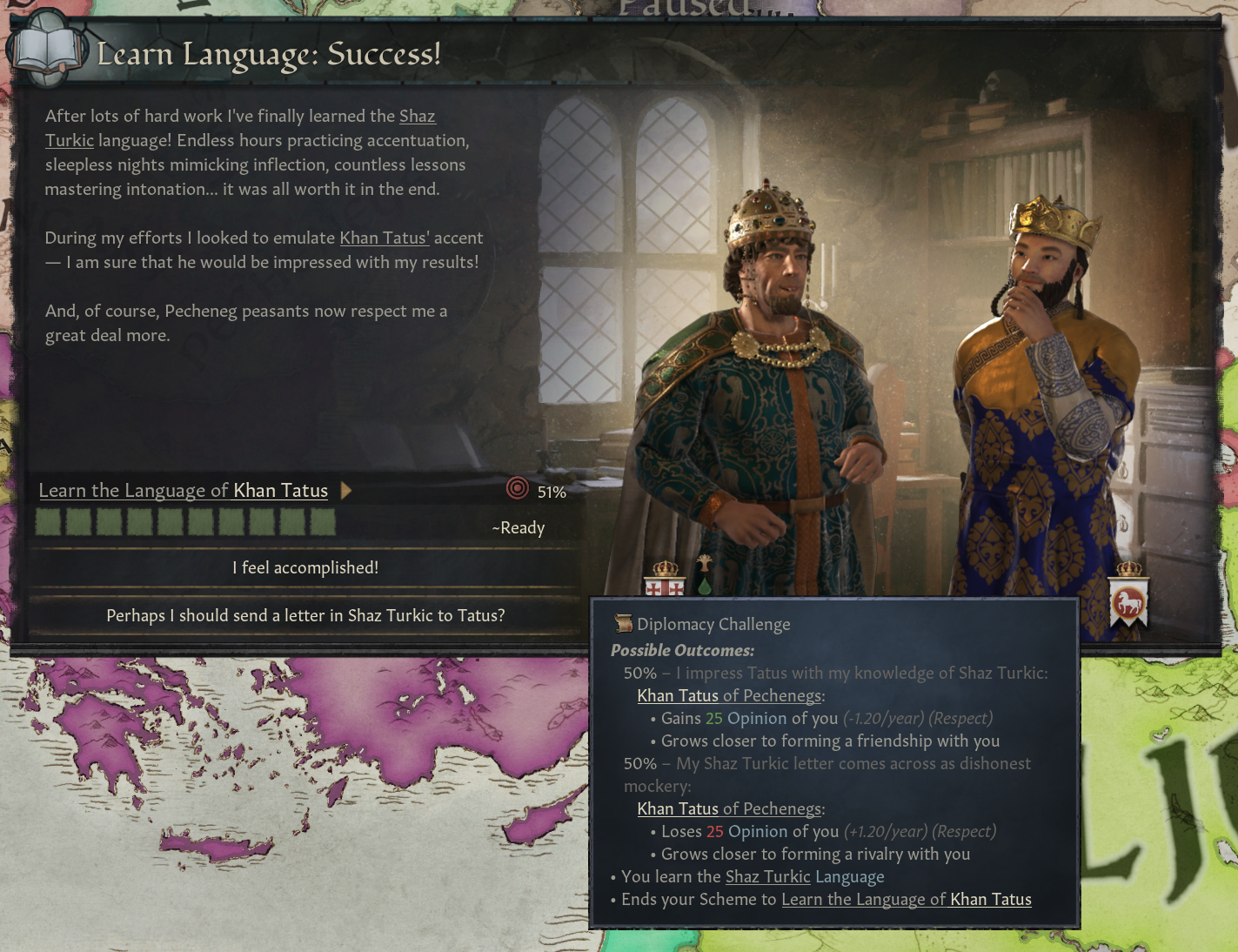 [Image of a successful scheme] 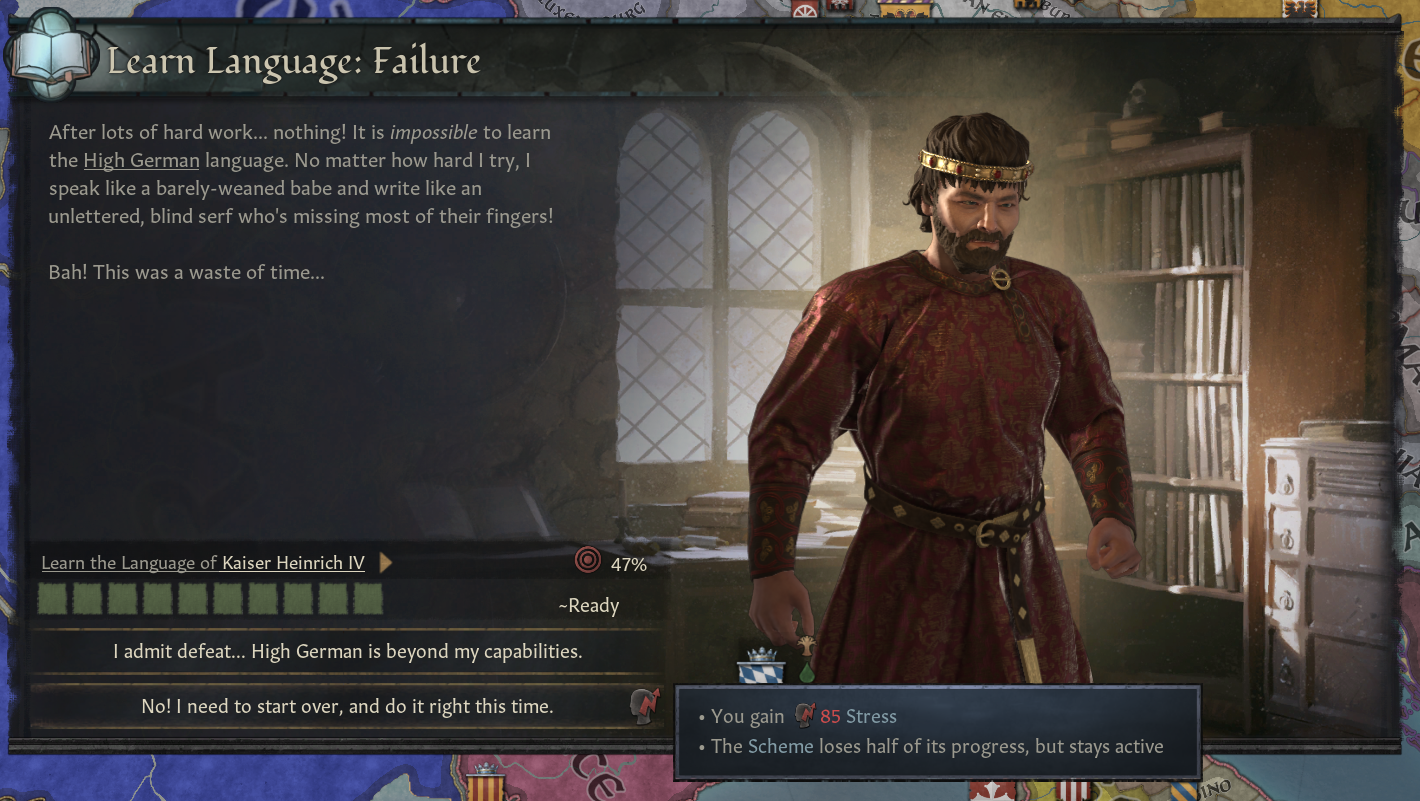 [Image of a failed scheme]

Of course, you might find that others are emulating you in their efforts to learn your language. This gives you the opportunity to praise their efforts, or perhaps you’d rather ridicule them? 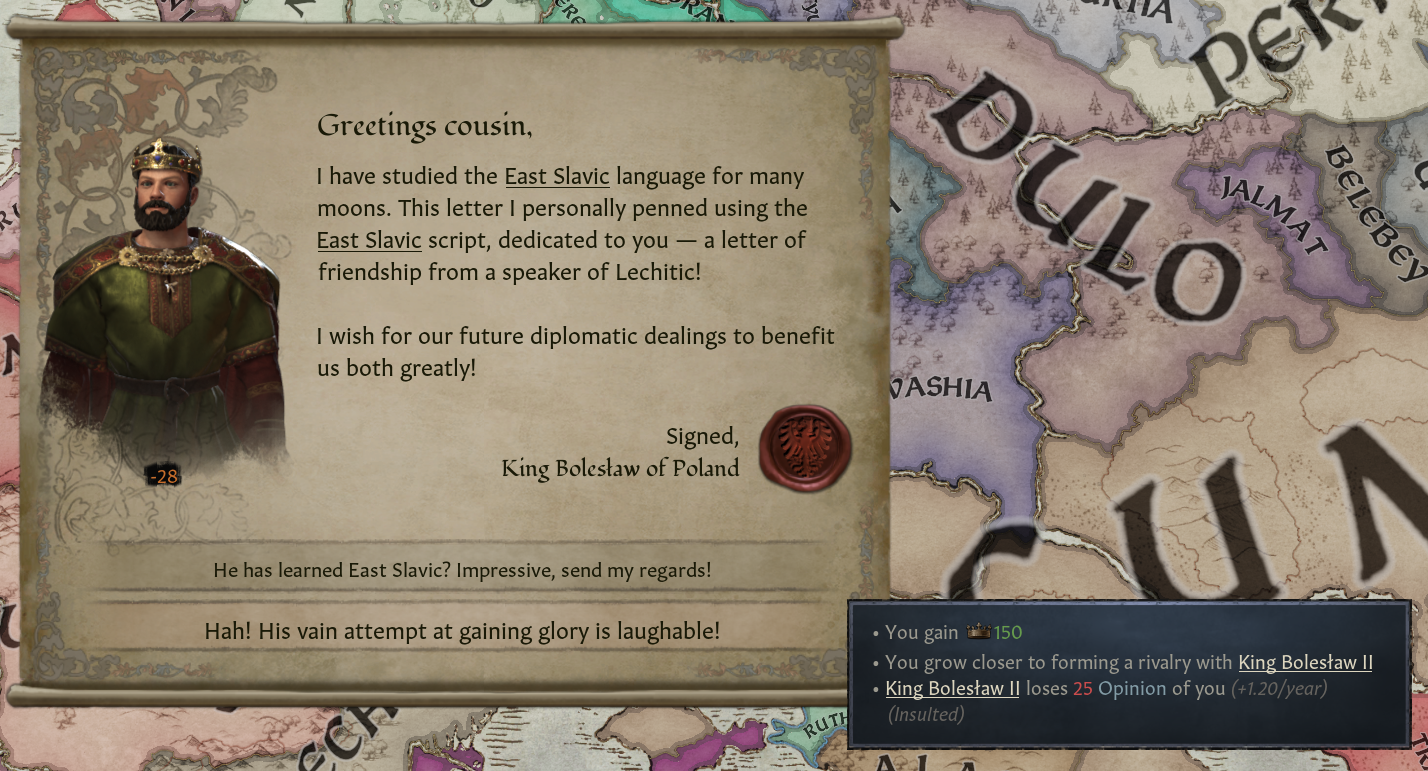 [Image of someone learning your language]

That’s it for this week! Now, this isn’t the only way languages are used in the game… next week we will dive into another use for them, something which ties directly into the mechanics of the Royal Court!