Dev Diary #74: Please Kaiser, Can I Have Some More? 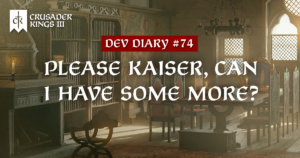 Greetings counts and dukes! Today we will be looking at The Royal Court from a different perspective: your perspective!

While being a queen or emperor is great and all, sometimes it can be a bit of a drag to manage all those vying subjects. Sometimes, you just want to rule a small corner of a mightier realm, and enjoy the benefits of the Emperor’s protection in exchange for your service. While a duchess doesn’t have their own Royal Court, they can interact with their Liege’s via two new decisions.

Petition Liege
Player vassals can approach their King-or-above ranked Liege with a Petition at any time through a new decision, providing they have enough Prestige, there is something they can ask for, and they haven’t done so in the last 5 years. 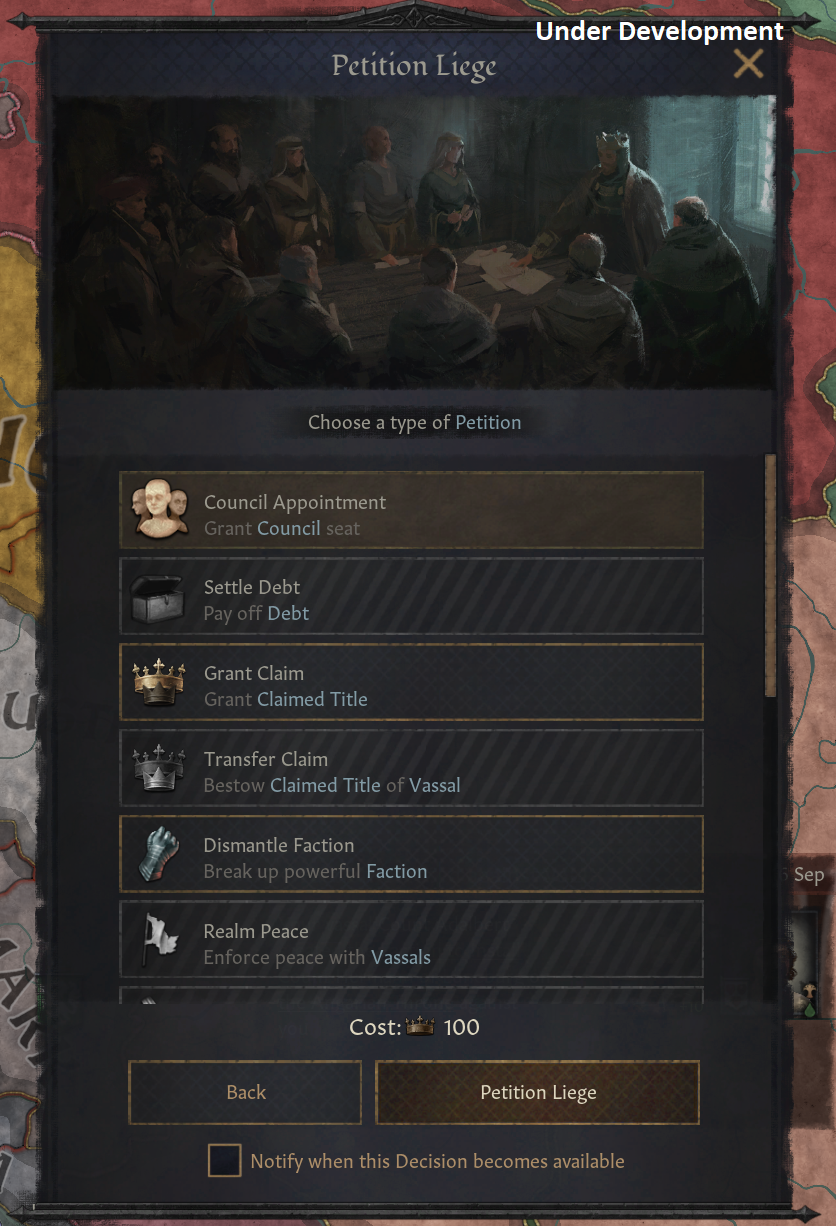 The possibilities include asking for a position on your Liege’s Council, asking for a Title you hold a claim on, or dismantling an unruly Faction in your own realm. There are currently 14 different options, each having some equivalent in the Hold Court events brought to Lieges by AI vassals, ranging from helping you convert your lands to paying off your debts.

This will allow you to ask for things directly without resorting immediately to war, which will remain a last resort when you need to topple a king whose tolerance of border-gore clearly proves their illegitimacy. 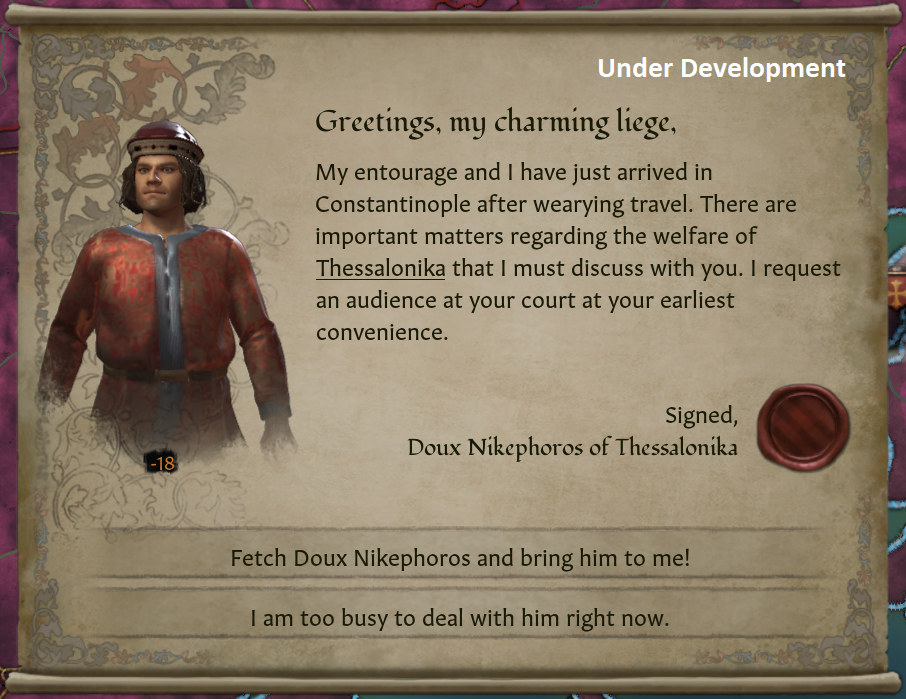 It is up to the Liege whether to receive a Petitioner, though outright refusing will damage relations and be seen as slightly tyrannical. The request itself may also be rejected once heard, and the odds of acceptance by the AI will be tipped more in your favor if you make reasonable requests and maintain good relations; after all, your boss doesn’t want to be seen as unreasonable.

If they are astute, your Liege may also ask for something in return for granting your Petition, such as a Favor Hook or a bit of Gold—a counter you can of course reject, leaving you both empty-handed.

If a Liege is not being very forthcoming, you can also attempt to convince or outsmart a trusted advisor as a last resort, at the cost of some Prestige. You will need to pass a skill check in a relevant area, usually against one of your Liege’s councillors, or have an ally near to the throne—the King’s wife perhaps—whose assent will force your Liege’s hand.

If you are a Liege, you will currently only interact with this content if you happen to have another player as your vassal and they make their own—no doubt outrageous—requests.

The second decision is available to both players and the AI.

Pay Homage
Homage represents the formal pledge of loyalty by a feudal lord to their Liege, and provides Opinion, Renown, and Prestige to both parties, providing the occasion goes smoothly. 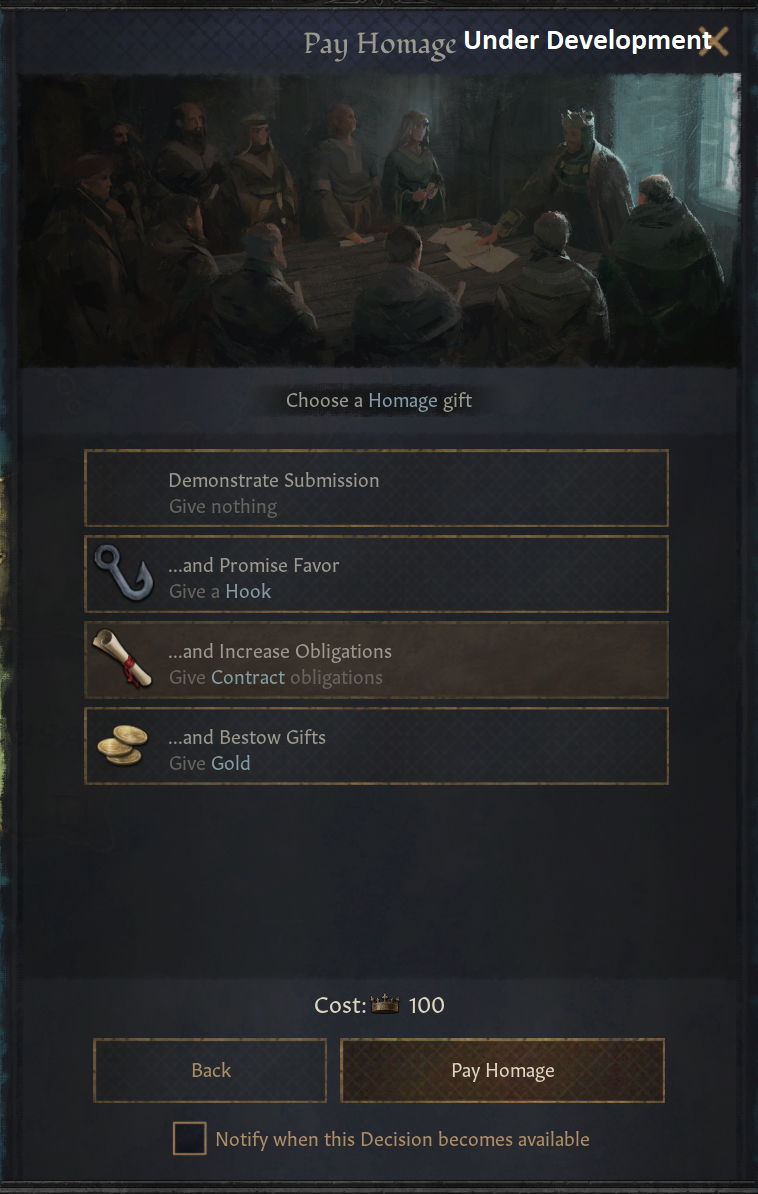 This decision costs some Prestige to initiate, is only available to Feudal and Clan vassals, and can only be undertaken once per Liege. If the ruler changes or dies, you can make a new pledge of allegiance to their replacement.

As with Petition Liege, this decision can be rejected outright, and is not totally without risk even if they let you through the door. There is a great deal of pressure for such an important event to go well, and not all lords and ladies are made for public speaking.

Things can go awry in a variety of ways, depending on the Petitioner’s skills and other factors: Have you put in the hours to learn Norman, or merely practised a few key lines the night before on the road to Windsor? Will your Shah empathise with your stammer, or imitate it in front of the entire Persian court? Will you forever more be called ‘the Clumsy’ by your vindictive Sultan, simply because you lost your balance once? 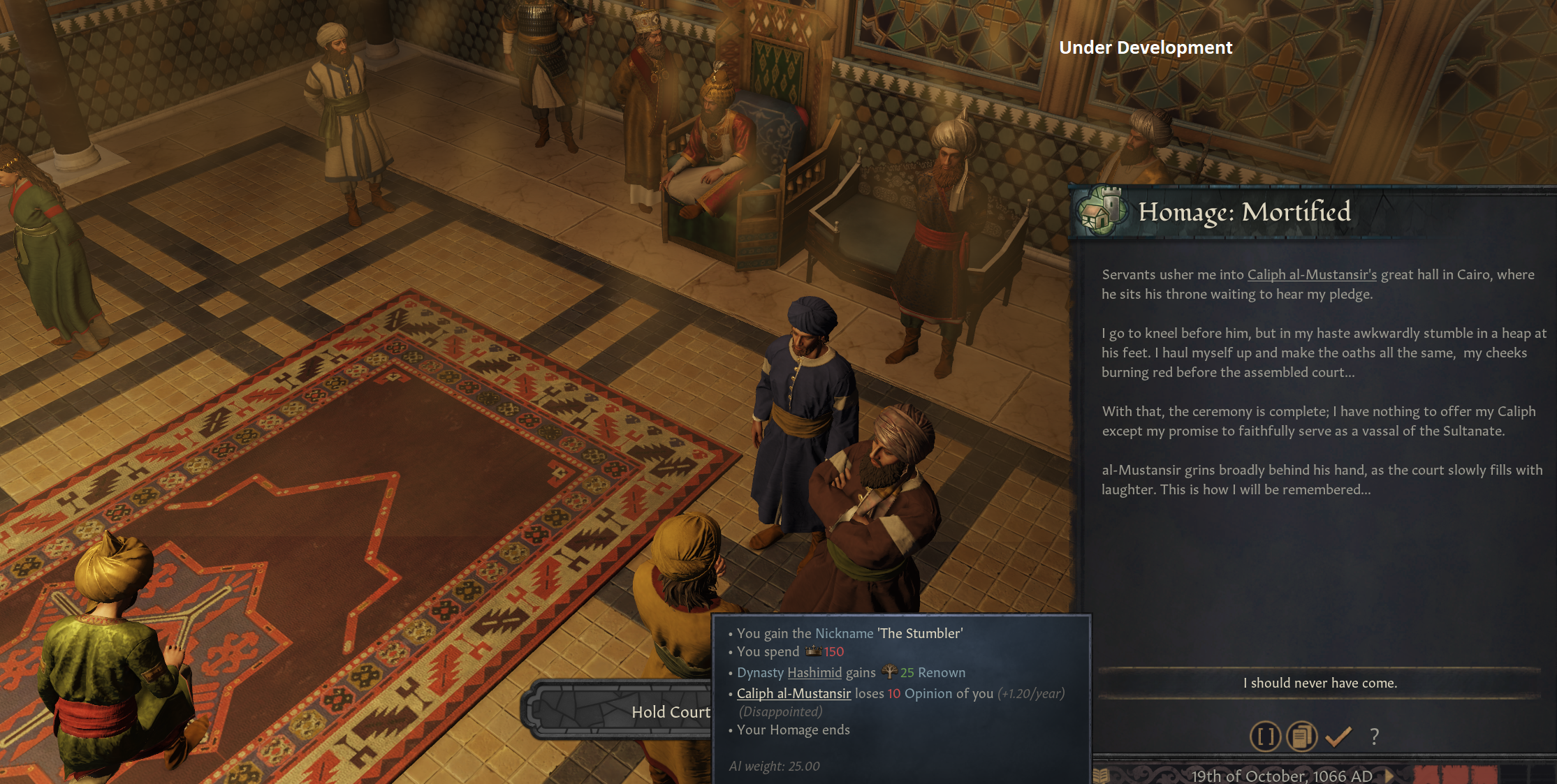 If something does go wrong, it is up to the Liege to decide if they will let it go—giving your rival the opportunity to publicly mock your clumsiness might not be the best idea. If they do decide to embarrass you, you will lose some Prestige and Opinion with your Liege, instead of gaining them.

Regardless of the outcome, both your Dynasties will gain a small amount of Renown, and the rewards are increased by offering gifts in addition to your pledge, such as a Contract change in favor of your Liege.

That broadly covers these two new decisions, so I’ll leave it there for now!