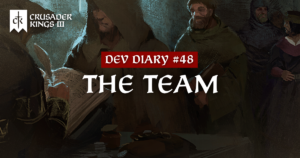 It’s a new year, and we thought it would be interesting to give all of you an update on the status of the team! There’s quite a few of us, and we hope you’ll enjoy this brief insight into who’s working on updates, fixes and exciting new content for your enjoyment!

My name is Carmille and I work as a Producer on CK3; I’ve been with the team for about one and a half years now. CK2 was one of my favorite games and the reason that I joined Paradox to begin with, so naturally I am feeling quite blessed to work on the project.  🙂

Firstly, an announcement! It has been decided that Alexander Oltner (aka rageair) will be stepping up as the new Game Director for the project! Alexander is the (now former) Design Lead for CK3, and has spent many years designing features for both CK2 and CK3. He started at the company in 2015 and, if you’ve tuned in to any of the pre-release streams or interviews, you surely know who he is already. Long-term fans might even recognize him as the lead designer behind Holy Fury for CK2, or perhaps you’ve seen him in one of the many past Dev Clashes. We have full confidence that Alex will be able to take up the reins and steer the project towards a bright future! The former Game Director, Henrik Fåhraeus (known on the forums as Doomdark), is ascending the ranks and will instead act as the Creative Director for many titles, CK3 included.

With that said, let’s move on to the team itself!
You might think that with the release of the base game, the amount of people working on the project would be reduced. We’re actually doing the exact opposite, and are in the process of expanding the team instead! This will give us a lot more flexibility and freedom and should allow us to work on several different things at the same time.
Naturally, we need to train and onboard our new team members so it is not something we can start with straight away, but our hope is that you will see the effects within a not so distant future.

Now, how many are actually working on CK3 and what are they doing?

The team is made up of many different disciplines, working together to create amazing experiences! We’ll go into more details on each of them below.

We have four people working in Production (myself included). Our job is to help the team bring the design to life and into your hands. We do this by setting up (and iterating upon) processes and workflows, identifying deadlines and milestones, making plans to hit those dates while staying in good shape and ensuring that everybody knows what to do. We can often be seen grooming CK3s task and bug database and making sure everything is according to plan, up to date and representative of the current situation as well as spending a lot of time looking at numbers in spreadsheets.

Our Game Designer is working very closely together with the Game Director. Their focus is split between what is currently being developed and nailing down the design for future expansions. They can very frequently be seen playing the game as it is being developed and make tweaks or highlight areas of concern so that the feature feels as great in the game as it looks on paper.

Just like Game Design, our two UX Designers have their focus split between what is happening in the game right now and what is being designed for future expansions. UX Design and Game Design work closely together and make sure that new features are both fun and user friendly. They focus on interactions and user interface, although they can often be seen giving feedback on when something just doesn’t feel intuitive.

Although the two previously mentioned design disciplines can sometimes be seen creating content for features as they are being developed, it’s the Content Designers that create the vast majority of it. We have eight Content Designers working on CK3, and unlike the other two Design disciplines, they are almost entirely focused on working with what’s being developed in the game here and now. They pride themselves on creating historically plausible content, and will spend a lot of their time researching something before it is being put into the game. They are skilled scripters and writers and very passionate about ensuring that all features have a soul made out of supportive events, decisions, interactions, etc.

There are seven Programmers and two Tech Leads working on CK3. The Tech Leads are responsible for the overall technical health and spend a lot of their time setting up (and iterating upon) processes and best practices for the project. They play a major part during all development stages and are constantly aware of the big picture and the challenges that could come with it.

Our Programmers are responsible for building the functionality and foundation of the features themselves. They work very closely together with the other disciplines on their features and can often be seen providing Code Support or in other ways using their skillset to make life easier for the non-coders. They will also keep an eye on performance and the overall stability of the game and jump upon an issue as soon as it appears.

There is one Art Director working on CK3, and their responsibility is the overall artistic vision. They work closely together with the Game Director and Production, but also with all of the Artists in the team.

We have three 2D Artists on the team and they can often be seen collaborating with Code and UX Design to bring the interfaces of new CK3 features to life after Code has provided their framework. They will also create icons and illustrations as well as investigate artistic improvements to the UIs that is not part of the UX design.

Our two Concept Artists help the game team by visualizing assets before they are to be created by a 3D Artist.

Just as the name indicates, our three Character Artists work on anything related to our characters. This not only includes the characters itself, but also the clothing, headgears and hairstyles. In addition to that they are also responsible for creating the Units that are walking around the map. They can often be seen working closely together with Animation.

These Artists work mostly on the map itself. We have four of them and they can often be seen creating holdings, ships, siege weapons and other map assets. They are also painting the map as well as making sure that all the units, holdings and other buildings are located where it makes sense, both from a historical perspective and an artistic one.

There is one Animator working on the project and their main focus is on bringing our characters and units to life. They can be seen working on brand new poses and adding more variety to existing ones to make sure the characters show a wide range of different emotions and visually support different situations.

CK3 is not a very VFX heavy game, and because of this we do not have a VFX artist working with us full time, but only on demand.

Our QA is the glue that keeps everything together. We have a core team of seven QA, but expand to a lot more once we are starting to wrap up and getting ready for a release. They can often be seen playing the game and testing the new features as they become ready, but it is important to note that this is not the only thing they do. They have a holistic view of quality and work closely together with all disciplines to make sure that the end product is as great as possible. Sometimes this is achieved through testing alone, but other times they can identify a need to redesign / introduce more content to a feature that feels a bit weak or perhaps a need to tweak a process or workflow within the Project itself.

The Audio team works on all PDS games, so we can’t really claim them for ourselves.
When they do work on CK3, they are often around two to three people and can be seen working on sound effects for our new features as well as composing music that fit the theme of the expansion.

Naturally, we don’t all work on the same features or fixes at the same time, that’d be very confusing! We’re divided into smaller groups, each focusing on their own set of features or content. Once a week we have a couple of hours set aside to make sure that everybody on the CK3 team has time to sit down and play the game and see for themselves how everything is being tied together.

The team is currently busy working on two things: one is big and the other is smaller. The smaller of these you’ll be hearing more of in the coming weeks…