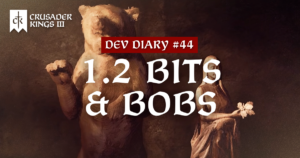 In this Dev Diary we’ll show off some of the other things we’ve been working on for the 1.2 patch! While the Ruler Designer is extremely cool, it’s not the only thing you’ll be getting – there’s plenty of exciting new things coming up! What follows below is a showcase of some of the things we’ve done, presented by someone who’s worked on it!

Kill List
A very fun feature from CK2 that we wanted to bring back is the Kill List, you might have noticed the new UI button in some of our Ruler Designer teasers before.
This skull icon will appear on any character who has killed people you know about and when clicked opens a list of everyone they killed and how they met their grisly fate. So you can get a sense of just how much of a true beast some of your strong knights are and how many of your foes they have vanquished on the battlefield in your name.
But of course it only shows the kills you know about, so some people that look innocent to you may in fact be hiding numerous skeletons in their closet… 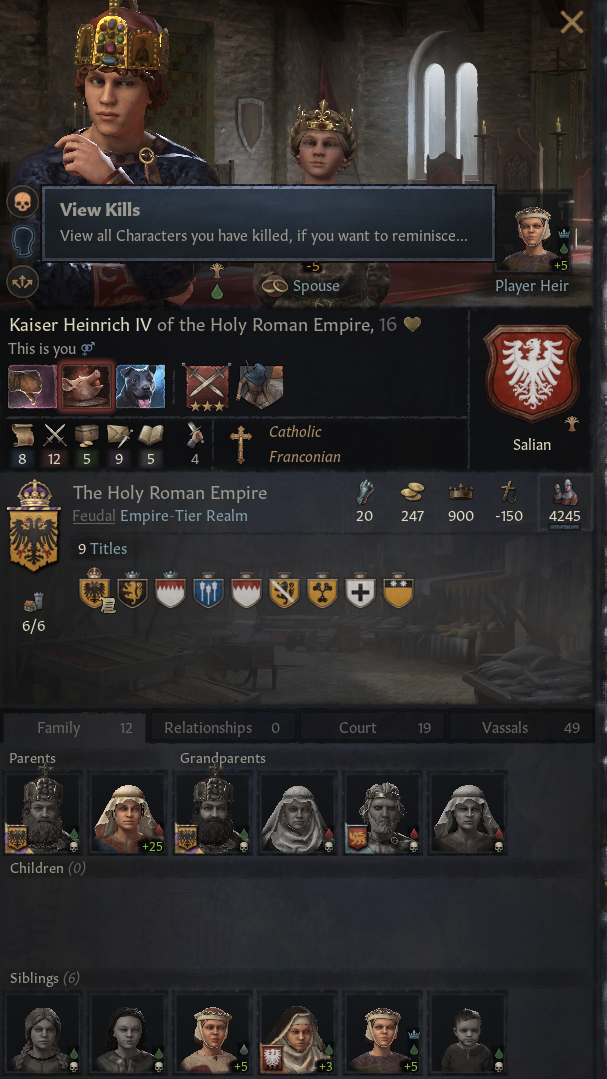 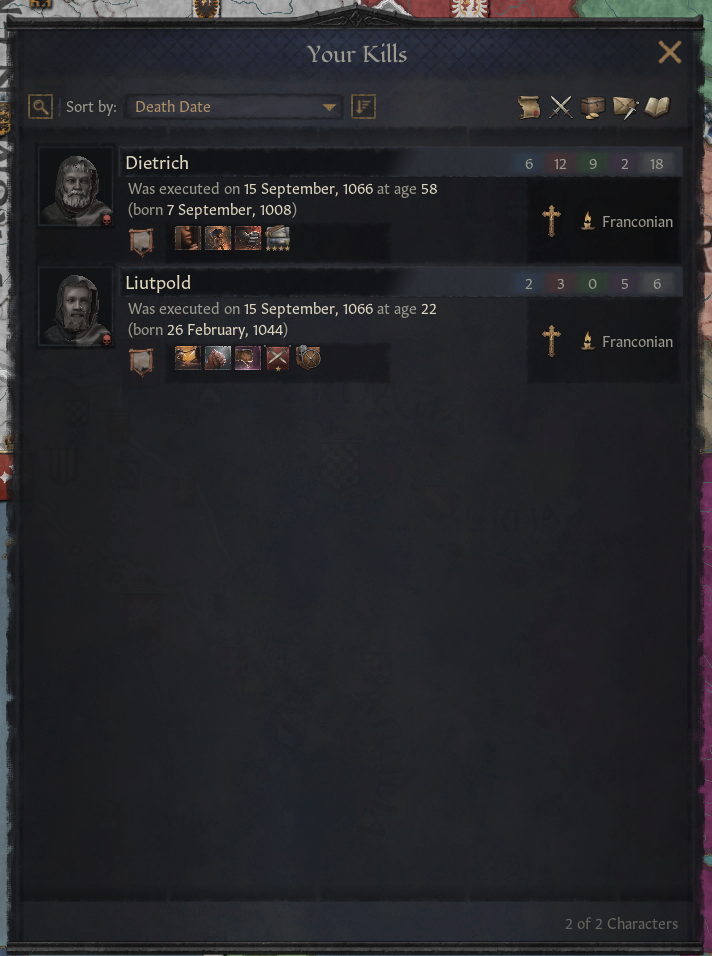 Attach to Army
Another helpful utility we wanted to add was being able to attach your armies to follow ally armies to their destinations. This is especially useful during bigger wars like Crusades where you are not the primary participant; you can attach to any friendly unit of an ally in the same province as your unit and of course then detach when you decide to go your own way. If there are multiple armies in a province you can attach to then a pop up window will open for you to decide which one you would like to follow.

[Picture of the attach to army button]

Force Realm Priest Endorsement
Your realm priest will endorse you normally if they have a good opinion of you, and we’ve now extended that so if you have a strong hook on them then they will passively be forced to endorse you regardless of their personal opinion of you.
That way you can still get all of those sweet taxes and levies from their church holdings even if they might personally think you are a blasphemous fool! 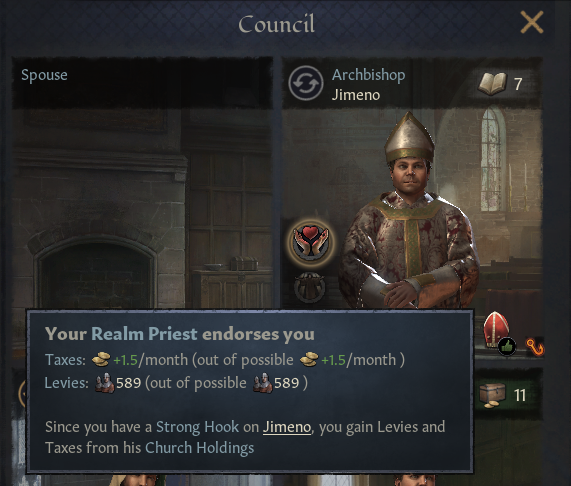 Tribal Walls / Tribal Holding variants
Tribes in different parts of the world will now look different! From longhouses in the north to yurts in the steppes, there’s now a visual difference between the major tribal regions on the map. We’ve also added one more visual tier of walls, symbolising the very lowest possible fort level a holding can have. 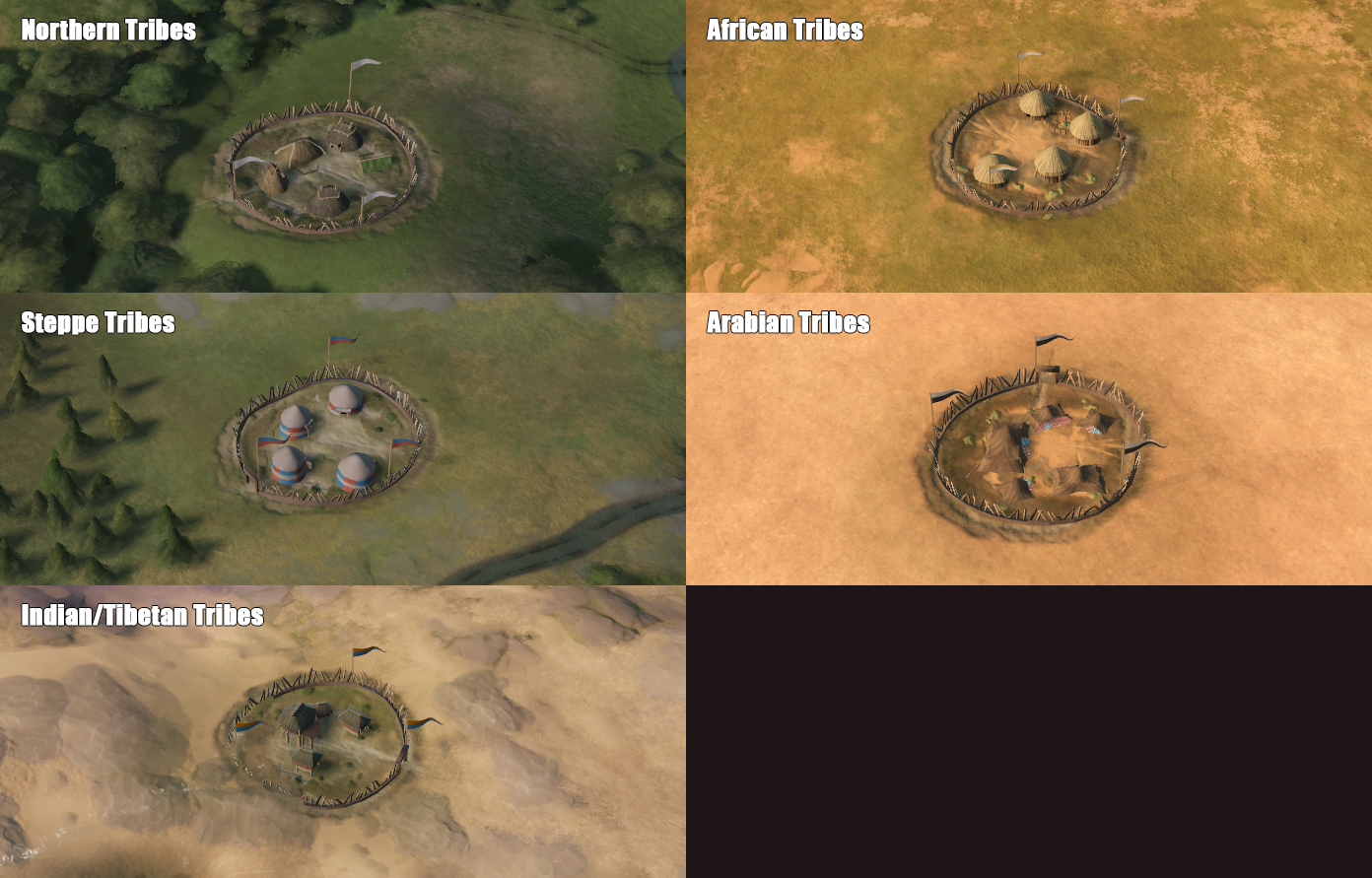 Reworked Dynasty UI
The Dynasty view has gotten some more love! The window now has two dynamic info boxes explaining how dynasty and house head is chosen, especially how Max military strength determines who’s dynasty head. Military strength can now also be seen and compared between house heads in the house list. The legacy area has gotten a new look to easier show which legacy tracks you have unlocked, how many steps are unlocked, and which ones you’ve finished.

Improved Battle UI
Battles have also gotten some more love, with the UI having received an overhaul. It now both looks nicer and places important information in a better layout!

[Picture of the improved Battle UI]

Player Coat of Arms Graphics
Your Coat Of Arms is now decorated with mantling! It adds a sense of flair and you can also spot other players easier on the map during multiplayer. 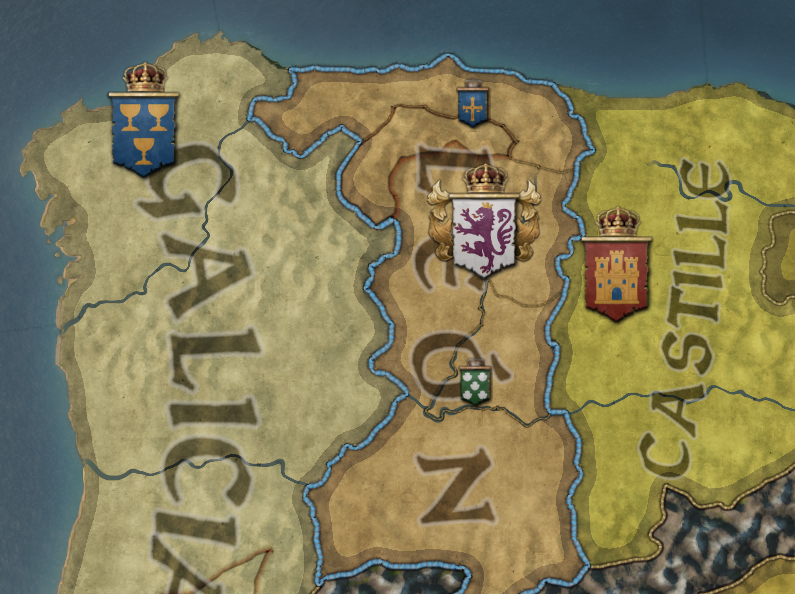 [Picture of Mantling on a player CoA]

Rally Point Improvements
We’ve done some work on the troop system in 1.2. As part of this we hope to have eliminated some bugs like levies failing to reinforce when they should.
More visibly, we’ve made one change to how troops get raised at rally points. Now if you exceed the supply limit the game will automatically split the army up to obey the supply limit, spreading it out over adjacent provinces. 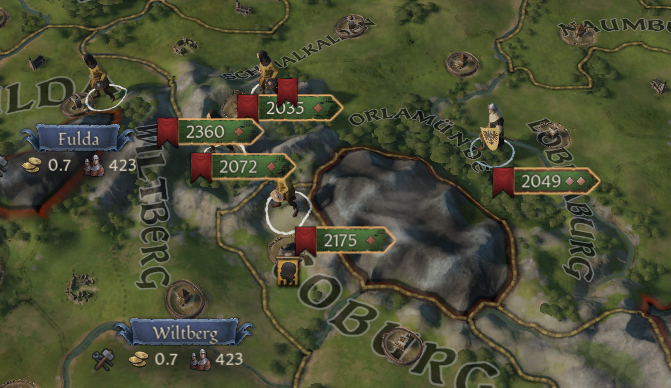 [Picture of a rally point where armies are spread out]

Pictured is what now happens when trying to raise a bit over 10k men in an area with supply limits of 2.5k.

Siberian Paganism
Suomenusko has long been in a bit of an awkward spot. It stretches over large territories where the people in reality worshiped many different deities. To improve the situation, we’ve made two changes. The first is a simple name change, as we’ve renamed Suomenusko to Ukonusko (after the main deity). It gives the faith a name that isn’t specifically Finnish, since we have several other cultures that share the same faith.

[Picture of new Faith Setup in the north]

Secondly, we’ve split it into two separate faiths by adding a new faith for the Siberian region. We felt that adding a new faith would be a significant improvement as to better reflect the varied beliefs of the Ugrian peoples. Named Turumic, after their main patron deity Numi-Turum, it is in some ways similar to Ukonusko in that it’s a faith closely linked to nature, but is different by their veneration of hunting. The tenets are the following: Ancestor Worship, Ritual Celebrations, and Sanctity of Nature. It uniquely has the Hunter lifestyle traits as virtues. The other virtues being Brave, Generous, and Temperate. Meanwhile, being Greedy, Craven, or Vengeful, is considered a sin.

Improved Ugliness System
In CK3, the “ugly” trait is a lot more interesting than it was in CK2, having a noticeable effect on portraits, and coming in three levels of severity. However, beyond the first level of the trait we didn’t quite achieve the levels of ugliness we wanted at release. So in 1.2 we’ve improved the system we use to distort the portraits of ugly people to make them uglier while still not feeling too out of place within the art style. Before 1.2 ugliness worked by changing skin texture and making all facial features more extreme. This is still the case, but in 1.2 we also pick a single or a small set of features to make especially extreme. This can result in a character for instance having a particularly messed up nose, a face that’s too small for their head, or the tiniest mouth. Focusing on small feature sets like this helps ensure that ugly people are varied in their ugliness, and more readily identifiable as “ugly”.
Below are a couple examples of how ugly characters will look in 1.2 vs. 1.1. 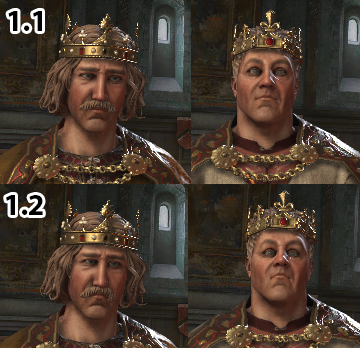 [Picture of a comparison between the same level of ugliness in 1.1 vs 1.2]

As you can see the difference isn’t massive, but helps make them a bit more interesting. There’s still room for improvement and especially so for the “Hideous” trait, but this was a relatively simple and safe change to make for 1.2.

Matrilineal Game Rules
We’ve added a new game rule that controls the behaviour of the AI when choosing which type of marriage to pursue. There’s plenty of options to choose from, so regardless what your preference is, it should hopefully be represented! All options are achievement compatible. 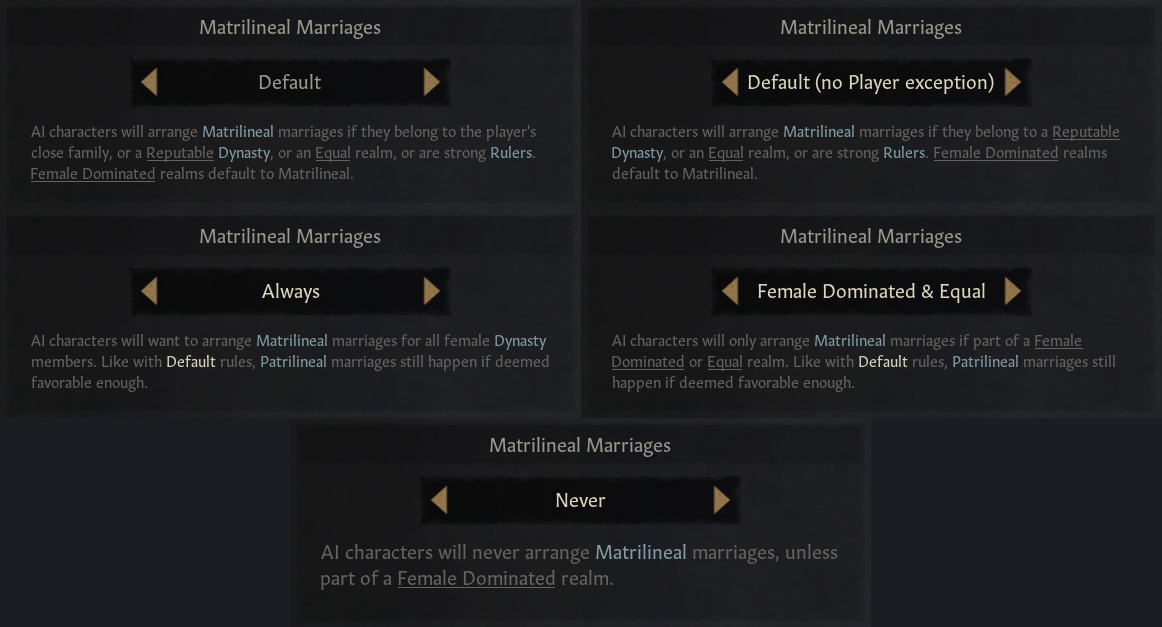 Naming Dynasty Members in Court
You now get to name all Dynasty members that are born in your court, not just your own children. This means that you can make sure that the correct names are passed down as you prefer!
New Event Content
You can now grow old, sick, tired, and depressed more efficiently, with new events that dole out the “Infirm” trait.
For those seeking even swifter departures from this mortal coil, we have expanded the Murder scheme with additional events and deadly outcomes! But take care — the mastermind behind a scheme can now be unmasked, in addition to the existence of the scheme itself. To even things out a bit, a Court Physician you recruit as an agent has a chance to purposely mess up treatments of your target — and they can now also properly treat their own wounds and conditions.

Other schemes and mechanics have gotten numerous content tweaks, additions, and updates.That’s it for this time! Don’t forget to tune in to tomorrows CK3 stream, where we’ll show off the 1.2 patch! Who knows, maybe you’ll even get to know the release date?