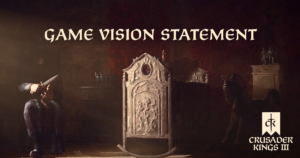 It’s my pleasure to finally be able to talk about what I’ve been working on ever since Stellaris came out (and before) – Crusader Kings III, of course! CK3 draws on the wisdom gained over CK2’s seven long years of expansions and patches – all the things we simply could not do in that game – and represents the natural evolution of Crusader Kings. Yes, CK3 is an evolution, not a revolution; it’s better across the board and does not alter the core CK experience. That said, we did not carry over everything from every expansion and update to CK2. Rather than trying to do full justice to the less appreciated systems, we decided to go deep rather than wide.

The main design goals with Crusader Kings III were:

Now, you might say: “Cool, but I took the time to master CK2, bought all the expansions, and now it provides me an enormous breadth of options. Why should I buy CK3?”

That’s a fair question! As I mentioned earlier, we decided not to carry over all features from CK2, so if you play CK2 primarily for, say, the nomads or the merchant republics (the only faction types that were playable in CK2 but not in CK3), you might be disappointed. There are likely other features and content that will be missed by some players, but, in return, we believe that everyone will find the core gameplay far more fun and rewarding! To be clear, CK3 is a vastly bigger game than CK2 was on release.

I know this dev diary was short on details, but don’t despair – they will be revealed over the coming months!