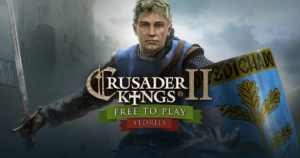 Each Monday the Crusader Kings Team shares two of the winners of our Stories competition! This week we take a look at the second places with Alex T (Most Comical) and Linnea S. (Most Dramatic)!

Click here to download the artwork by Linnea S., below you will find her accompanying short story.

Entry is mainly the drawing, but below is an accompanying short piece of writing as well that explains what happened in my playthrough. “Thrust into her role after her older sister’s untimely death at the hands of a plague, the young Queen of Éire swiftly took up arms to erase the last remnants of the English rule and declared hers the Empire of Alba. It came at a cost, however, as a tragedy befell her.

The Queen’s closest friend, a Commander of Éire by title, was slain in one of the last fights before the surrender of the enemy forces. While peace was now finally upon the isles, an emptiness grew within her heart.

The realm prospered more than ever during those times, but none would remember that as the legacy of the first empress. Her name would fade away from the texts and her fate would only be spoken about in whispers by courtiers. That is, that on a particularly beautiful day, she had been found lifeless in the gardens, with an apple she had poisoned herself in her hand.”